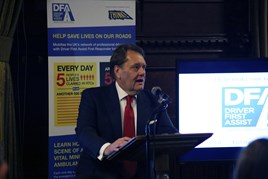 A Government minister has called on car, van and truck fleets to follow his example after he signed up for a training programme designed to save lives in the aftermath of serious road accidents.

Transport minister John Hayes committed to take a seven-hour Driver First Assist course after receiving a briefing about the work of the not-for-profit organisation, which provides emergency first aid training for motorists who are first at the scene of a serious road traffic collision.

The training focuses on the critical first few minutes following a crash, before the emergency services arrive, when it is estimated half of road fatalities occur.

Driver First Assist believes some of these deaths could be avoided if other motorists had training in basic techniques, particularly dealing with a blocked airway, which can lead to a fatality in four minutes. The targeted response time of the emergency services is eight minutes.

During an event held at the House of Commons, Hayes said: “This is a really serious subject. This campaign is going to save lives and that is great news.

“The amount of training provided doesn’t have to be onerous. With a seven-hour training course you can give someone those life-saving skills. This is a process which is accessible and available to everyone.

“I don’t have those skills and I am going to get them. Following the briefing I have had, I am going to attend one of these courses. There is no point in me saying ‘go on the course’ and not going on it myself.

“I could be that person who is first there at the scene. Why would I not want to be the person with the skills to make a difference? If I can be equipped with those skills, I will be.”

The event was held to recognise the support of the Road Haulage Association (RHA) for Driver First Assist. It has also received financial backing from the Department for Transport and cross-party support from MPs including Robert Flello, a member of the Transport Select Committee, who hosted the Westminster event.

Its courses run at venues throughout the country and, in addition to first aid techniques, teach attendees how to notify the emergency services with accurate information about the location and nature of an incident and how to keep people safe at the scene.

Driver First Assist has already recruited the support of 1,000 members, but its ambition is to have 5,000 by the end of the year, with an eventual target of 100,000.

Founder David Higginbottom said: “Our aim is to secure support through the fleet industry. We have always known that the biggest pool of potential lifesavers is people who don’t drive professionally, but drive as part of their profession.”

He added that members were already putting their skills into use on the road and he aimed to create a platform for the community to share its experiences of making a difference.

Martyn Nash, chairman of VGroup International, who became a director of Driver First Assist last year, said: “Prime Minister Theresa May has talked about the shared society. We have first aiders in the workplace, but we don’t have first aiders on the roads.

“If more people are trained to save lives there would be less pressure on the NHS, which would help everyone.”

VGroup has already provided training to its employees and supplies safety kits to the programme free of charge.

LeasePlan UK is one of the first fleet companies to commit its support to Driver First Assist. The company’s high mileage employees have received training and it is also being promoted to customers.