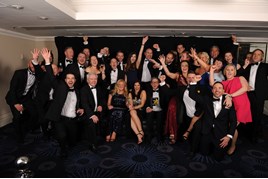 > And were you snapped by the Fleet News Awards paparazzi as you made your way to the Great Room at the Grosvenor House Hotel?
Find out if you were 'papped'.

Audi has scored a hat trick of wins at the 2017 Fleet News Awards, including the coveted Fleet Manufacturer of the Year voted for exclusively by fleets.

The prestigious headline victory was achieved alongside wins for the Audi A3 and Audi A4 in their respective categories, Best Compact Premium Car and Best Premium Car.

The awards were presented at a ceremony hosted by BBC News anchor Huw Edwards and attended by more than 1,400 people at the Grosvenor House Hotel in London on Wednesday (March 15).

It was also a big night for Mercedes-Benz, whose E-Class also followed up a win as Best Executive Car with New Company Car of the Year, the second category voted for by Fleet News readers.

Hyundai also picked up two awards, both of which underline the manufacturer’s environmental credentials, with Green Fleet Manufacturer of the Year and a win for the new Ioniq Electric as the Best Plug-in Car (0g/km).

BMW’s i3 Range Extender took the win among plug-in cars with CO2 emissions from 1-50g/km, while the Skoda Superb was judged Best Upper-Medium Car for the second successive year with the Vauxhall Astra also making it two in a row for Best Lower-Medium Car.

There was success for other newcomers in 2016 too, with the Citroën C3, Seat Ateca and Jaguar F-Pace triumphant among their peers.

Fiat Chrysler Automobiles was judged the Most Improved Fleet Manufacturer of the Year, and the Nissan Juke was rewarded for combining low operating costs with driver appeal.

The Fleet News Awards are judged by a broad panel of industry experts with an independent chairman – former SMMT chief executive Christopher Macgowan. The whole process is audited by Deloitte to ensure all contenders are given due and proper consideration.

But two headline awards – Fleet Manufacturer of the Year, and New Company Car of the Year – are voted for exclusively by fleet manager readers of the magazine, whose job titles are checked against the Fleet News database, and who are sent an access code allowing them to vote only once.

As well as covering the main car sectors in the UK fleet market, there are also awards for the best fleet operators, as well as rewarding excellence among leasing companies, rental companies and other fleet suppliers.

Zenith was judged the Best Leasing Company (more than 20,000 vehicles), with a customer service platform that allows it to quickly identify areas of improvement, while the AA’s performance among fleet operators was acknowledged with the Customer Service Award.

But BT Fleet stood out as the organisation that most makes life easier for fleet operators, winning Fleet Supplier of the year.

The Environment Agency was recognised among the large fleets for its keenness to innovate to successfully improve how its fleet operates, while Royal Mail was rewarded for how it has identified cost savings and its willingness to implement new ideas across a huge organisation.

Panasonic was singled out for its environmental initiatives beyond running low-emission vehicles, including its home working policy and clever use of solar panels.

The former fleet manager for British Gas, Colin Marriott, was inducted into the Fleet News Hall of Fame following his retirement from managing the 15,000-strong fleet of vehicles at the UK’s largest energy company.

Stephen Briers, Fleet News editor -in-chief, said: "The 2017 Fleet News Awards was another spectacular night with more than 1,400 guests coming together to celebrate the best people, companies and cars.

“We were delighted to welcome the transport minister John Hayes to present some awards, an acknowledgment of the importance of the fleet sector to Government.

“The event is the highlight of the year in the fleet calendar and a wonderful way for us to recognise and honour all the dedication and innovation that makes fleet such an inspiring place to work."

The results from the 32 awards in the 2017 Fleet News Awards: the winners and those highly commended.

Fleet News supports Marie Curie at the awards. The night raised £15,500 for the cancer charity, the equivalent of 775 hours of one-to-one care from a Marie Curie nurse for a terminally ill patient.