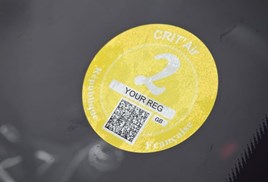 The RAC is urging UK motorists driving to Paris, Lyon and Grenoble this Easter to order recently introduced vehicle emissions stickers as soon as possible after it took six weeks for one to reach the UK.

The Crit’Air scheme, which was brought into force in January by the French authorities to tackle pollution, requires all vehicles – cars, lorries, motorbikes and buses – to display a windscreen sticker, or vignette, according to how much they pollute.

Stickers, which cost £3.60 (€4.18) each including postage, come in six categories and cover the very cleanest electric or hydrogen-powered vehicles (Crit’Air green sticker) to the dirtiest (Crit’Air 5 grey sticker). These relate to the six European Union emission standards for cars – dating back to 1992 when Euro 1 was introduced. The penalty for failure to display a sticker is an on-the-spot fine of between €68-135 (£58 to £117).

In order to test the efficiency of the system the RAC ordered a vignette from the official Crit’Air website on February 6 and it arrived six weeks later on March 16, despite the letter being dated March 2. The website states that stickers should be delivered within 30 days.

RAC European breakdown spokesman Simon Williams said: “We ordered an ‘anti-pollution’ sticker as a test shortly after the English-language site went live and worryingly it took a full six weeks to turn up.

“As a result we are now concerned that anyone who orders one now for a trip that will take them into the centre of Paris, Lyon or Grenoble this Easter will not receive it in time and may be at risk of an unwanted encounter with the French authorities.

“We strongly urge people planning to drive to these cities at May half-term to order their stickers now to avoid any issues.

“We would hope the French police would not fine anyone that has ordered a sticker and has email proof of that. However, those motorists who don’t order stickers are in danger of being fined up to £117, although we understand the police will be lenient in the early days, particularly with foreign drivers.

“People concerned about the progress of their stickers can track their orders on the Government’s official Crit’Air website.”

To apply for a sticker online drivers must know their vehicle’s European Emissions Standard. For newer vehicles, covered by Euro 5 and Euro 6 standards, the category may be in section D2 of your DVLA V5C registered keeper form. For older vehicles, motorists will need to find out when their vehicle was manufactured and check it with the emissions bands on the above webpage.

Williams added: “The best advice for motorists ordering their stickers is to make sure they use the French Government website as there are third party operators offering the same service but for significantly more money.

“Another important point to be aware of is around the requirement to upload an image of your vehicle’s V5C registered keeper form as the file size can only be a maximum of 400kb which isn’t very big at all. You may therefore have to change your scanner settings or reduce the file size after you’ve scanned it.”

The new Crit’Air system is used on high pollution days to prevent the worst polluting vehicles from driving in the affected cities. In the future, however, vehicles may be banned from driving in Crit’Air areas on certain days based on which emissions sticker they have.

In addition, some vehicles have not been assigned a category and are therefore unable to drive in Paris between 8am and 8pm, Monday to Friday. Typically, these are older models, such as cars registered before 1997, motorbikes and scooters from before June 2000, and trucks and buses from before 2001. Based on the pre-1997 criteria, the RAC understands that one in 10 (9%) French vehicles are too old to get a sticker.

Prior to the Crit’Air system being introduced on several heavy pollution days in Paris the authorities banned vehicles from driving in the city based on whether their number plates were odd or even. Paris, along with Madrid, Athens and Mexico City also have wider plans to ban all diesel vehicles from the city by 2025.

For more information on the air quality measures, go to the RAC website.