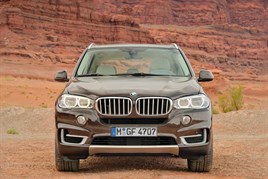 The West Midlands remains one of the top regions where cars are most commonly stolen and recovered, with the most popular make and model car among its thieves being the BMW X5, according to the latest stolen vehicle recovery (SVR) figures from Tracker.

The latest victim of West Midland’s BMW loving criminals was Richard Smith.  After returning to Widney Manor train station after his commute home from work, he discovered his BMW X5 had been stolen.  Fortunately, his car was fitted with Tracker’s stolen vehicle recovery (SVR) technology and police located and recovered the BMW the very next morning.

Smith said: “I park my car at that station every day, so it was such a shock to find my car taken. But it was a huge relief that the police had found it the very next morning.

“It could have been a very different story if police hadn’t been able to follow the Tracker signal to find my car.”

Andy Barrs, head of police liaison at Tracker, said: “According to West Midlands Police, Mr Smith’s car was broken into and an electronic device was used to start it. This highlights how thieves use sophisticated methods to find ways around a car’s security systems.

“It’s also important to realise that professional criminals will often stake out hotspots, such as train station car parks to identify opportunities. Someone may have known Mr Smith’s routine and struck, knowing how long they had before he came back from work.

“Luckily for Mr Smith, he had a Tracker fitted, which led police to the stolen BMW, which demonstrates just how powerful SVR technology can be in closing the net on thieves.

“It may not stop a vehicle being stolen, but a Tracker device significantly increases the chances of police locating and recovering it before the criminals can sell it on.”

Tracker’s stolen vehicle recovery system works like an electronic homing device. A covert transmitter is hidden in one of several dozen places around the vehicle. There is no visible aerial.