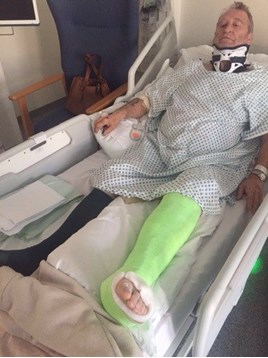 Highways England hashighlighted the dangers faced by road workers as it released images of an incident that left a man with multiple injuries.

Les Bramwell was walking along the pavement after routinely assessing repairs to a pothole on the A50 near Stoke-on-Trent when he was struck by a car last April (2016).

The 65-year-old was left with serious injuries and says it’s a miracle he wasn’t killed.

Nearly a year on, he has only just had a neck brace removed and is only now able to drive again.

The case was highlighted as it was revealed 12 road workers, including two traffic officers, have lost their lives on the network over the past 10 years. In three of the cases the victims were knocked down by members of the public.

Meanwhile, over the past 10 years, workers have been injured by motorists on more than 50 occasions. Seventeen of those incidents involved workers on foot.

And since May there have been around 150 recorded incidents each month of vehicles encroaching onto sites where work is taking place.

He said: “I want to highlight to people the dangers of our job.

“Something that should have been a routine task has had a serious impact on my life, and that’s why it’s so important that we educate motorists about the dangers of the work we do day in, day out.”

Catherine Brookes, Highways England Midlands regional director, said: "Nobody needs a road so badly that somebody needs to lose their life while maintaining or improving it; it is my absolute priority that people go home safely at the end of every day.

“It is simply unacceptable that people run the risk of being killed or seriously injured while doing their job. While we can’t eliminate risk on the road network we need to do our utmost to protect the lives of both drivers and road workers.

“And motorists need to slow down near road works and obey speed limits and signs. Think what it would be like if you had to contend with lorries and cars driving through your shop, office or school.”

Bramwell was working for Highways England contractor Kier as an Asset Incident Watchman and had been assessing repair work as part of his day-to-day duties.

As he returned to his van, parked at a nearby petrol station, a car left the dual carriageway, mounted the pavement and ploughed into him from behind.

CCTV footage shows the car travelling behind an HGV which slows down as a car in front turns into the petrol station. At that point the vehicle behind the lorry can be seen mounting the pavement and hitting Bramwell.

He was taken to hospital with a broken neck and a leg broken in three places.

“I had to sleep downstairs for six months because I couldn’t go upstairs,” he said. “It’s been a massive strain on my family and I’ve had my confidence taken away.

“Everything has been turned upside down. Although my injuries mean I will spend at least a year in recovery, I could have been paralysed or worse - lost my life.”

Bramwell, from Penkridge, Staffordshire, who has been in the job for more than nine years, is a married father-of-two with four young grandchildren. He was based at Kier’s Doxey depot off the M6 in Stafford with colleague Matt Wyse before the incident.

Wyse, from Hednesford, said: “I’ve always been aware of the dangers – working on the roads, our lives are in the hands of others – but you can never predict what may happen. I urge drivers to look out for road workers as they drive through roadworks.”

Following the incident a 70-year-old man admitted driving without due care and attention and was fined £105, costs of £85 and a victim surcharge of £30 and given three points.

Highways England is committed to making the road network a safer place to use and work on and has a goal of reducing the number of people killed or injured to as close as possible to zero by 2040.

It is reminding drivers that just because workers aren’t visible, it doesn’t mean they are not present. This is especially true when operations take place at night, but also applies when visibility is restricted by works vehicles and equipment.