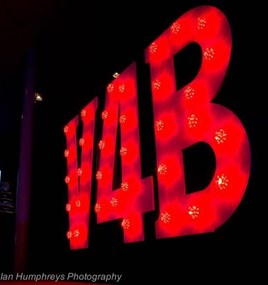 Two lucky Vehicles for Business (V4B) customers have won their personal contract hire costs paid by V4B for a year, after scooping the prize at the group’s 25th anniversary gala at Chester Racecourse on Saturday evening.

Nigel Bolton from Bilston and Kevan Smart from Leicester won the yearly rentals on their Citroen C4 Picasso and a Citroen DS 3 for a year, after their names were drawn at the black-tie event.

V4B customers have been entering the competition over the past year by supplying a photo with their V4B lease car.

The giveaway, which has a cash equivalent of almost £3,500, was one of the highlights of the evening as 300 guests including customers, suppliers and friends joined V4B employees to celebrate 25 years in business for the group.

Guests enjoyed a champagne reception, three-course dinner, a set by live band, The Manytones and dancing until 1am.

Smart who won the competition will have his rentals paid by V4B for the next year. He said: “I feel very privileged to win this prize. This is my first lease car and I have found a great company in V4B. From the first point of contact everything has been handled very professionally.”

Bolton also won a 12-month prize. He added: “I am over the moon to win this competition, just when I thought their service couldn’t get any better I get a phone call to say I had won a year’s money back. Fantastic.”

Wrexham-based V4B was founded in 1992 from a small office in Ruthin by Richard Boreham with a vision to complete a deal a week. The company now funds more than £100 million every year for vehicles across Europe.

Boreham said: “It was such an honour to celebrate our 25th anniversary with so many of our valued, loyal customers, suppliers and friends. Seeing everyone together made me extremely proud of what we have achieved over the past 25 years.

“I’ve witnessed many ups and downs within the leasing industry over the past 25 years. The way we do business now is far removed from what it was in 1992. Obviously, the introduction of the internet has had an enormous impact on sales processes.

“I’m now looking forward to the next 25 years by continuing our partnership with existing loyal customers while building new client relationships along the way.”