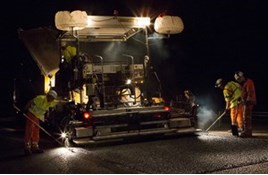 Councils in England have been awarded funding to refurbish bridges, improve junctions and boost flood defences as part of a multi-million pound government investment announced by transport minister Jesse Norman.

Nineteen projects across the country will receive a share of £75 million of government investment for essential road maintenance.

The local funding announcement comes as Highways England says it has completed seven major schemes valued at more than £800m in the past year and a further 15 will start or open in 2017/18.

Local authorities were challenged to put forward schemes which could make a real difference to road users for a share of the £75m. Winning projects include junction improvements, repairs and resurfacing, flood resilience measures, bridge and viaduct refurbishment, and improved drainage.

Norman said: “We are taking the big decisions for Britain’s future by investing in the infrastructure the country needs and ensuring motorists have the well maintained roads they expect and deserve.

“This investment will enable councils to repair roads and key infrastructure like bridges – boosting reliability on our roads so people can stay connected with family, friends and employment, while also keeping businesses connected with customers.”

Most of the schemes will be delivered within the next 12 months, so many drivers will see an immediate impact.

Among the projects which will receive funding is a £4.6m refurbishment of the A589 Greyhound Bridge in Lancashire enabling HGVs to access the bridge, boosting access for businesses and securing skilled jobs locally.

Road users in Devon will benefit from a major carriageway and drainage renewal scheme to regenerate the dual-carriageway stretch of the A361. This will improve access from Devon to the M5, supporting local businesses and aiding tourism in the region.

In Northumberland, £5m for crucial maintenance will repair and strengthen key routes for the rural and regional economy, giving a boost to tourism by making it easier for visitors to reach destinations such as Hadrian’s Wall World Heritage site and Northumberland National Park.

Meanwhile, the Highways England programme aims to improve journeys for fleets using the strategic road network across the country.

The huge programme of improvements is part of the biggest Government investment in the road network since the 1970s.

“Also, we recognise the impact doing all this work has on road users while it is happening and so we have taken steps like shortening roadworks and providing better journey information to improve their experience. And we will reinforce our focus on safety, customer service and delivery as we press ahead shaping the next Road Investment Strategy 2020-2025.”

Major schemes that we plan to start in 2017/18 include smart motorways between junctions three and five on the M20 near Maidstone, and on the M6 around Coventry.

Improvements scheduled to open to traffic include a smart motorway on parts of the M60 and M62 in Greater Manchester, and an upgrade of the A1 between Leeming and Barton in the North East.

Since April 2017 Highways England has opened four more major road improvements to road users. Work now continues on a further 16 schemes currently in construction. These include the £1.4bn Cambridge to Huntingdon scheme where besides the road improvement, the company has partnered with a training academy to create a dedicated training and apprenticeship course to support local skills through this scheme and beyond.

Highways England will also use extra £220m investment announced in the 2016 Autumn Statement to improve safety, increase capacity and reduce journey times on some of our most heavily congested roundabouts, junctions and slip roads.

Since it was created in April 2015 Highways England has delivered almost £4bn worth of capital investment on motorways and main trunk roads, completing 16 schemes on or ahead of schedule, adding more than 175 lane miles of much-needed capacity.

Among the improvements completed in 2016/17 were increased capacity on the A1 between Coal House and Metro Centre near Newcastle tackling congestion and benefiting the 116,000 drivers that use the A1 every day, easing congestion at the busy junction 30 of the M25, helping unlock the multi-billion pound regeneration of the Lower Thames Valley; and upgrading the interchange, between the M1, M6 and A14 at Catthorpe which is used by more than 45,000 vehicles every day.

The company’s annual report shows it has also contributed £40m from its Growth and Housing Fund to 13 improvements that will unlock the opportunity to create 22,000 new homes and more than 34,000 jobs.

The M3 in Surrey and Hampshire became the latest road in the UK to be upgraded to a smart motorway this week.

Technology installed on a 13.4 mile section of the motorway between the M25 and Farnborough sets the speed limit to match conditions, helps spot any queuing traffic, incidents or broken down vehicles, and informs drivers about conditions ahead.

The hard shoulder has been converted to a new fourth traffic lane in each direction, boosting capacity by a third on the vital route between London and the South West.

Shaun Pidcock, director of Highways England’s smart motorway programme, said: “We’ve added 26.8 miles of new lanes to this busy section of the M3 and completely overhauled the technology to give drivers better information to help with their journeys.