The number of company car drivers who expect to have a petrol hybrid as their next car is almost as high as those taking on a diesel, according to a Fleet News poll.

Asked what their next company car would be, about a third (35.1%) of respondents said diesel, while 34.2% said they will opt for a petrol hybrid vehicle.

About a sixth (16.9%) said they will choose a petrol-powered car, while almost one in 10 (8%) have set their sights on a pure electric vehicle (EV).

This mirrors the experience of major leasing companies, who report growing take-up of petrol and petrol hybrid vehicles over the past few years.

The latest sales data from the Society of Motor Manufacturers and Traders (SMMT) shows diesel remains the dominant fuel type for fleets, with 448,909 cars registered between January and July this year. However, that is 10% less than the 499,185 units registered over the same period in 2016.

Petrol fleet registrations have increased, with 333,591 units registered year-to-date, compared to 290,176 during the same period last year – a 15% increase.

Meanwhile, the SMMT data shows that plug-in hybrids (PHEVs) recorded a 4% increase over the same period, up to 10,599 units, and there was a 20% hike in registrations of pure electric cars at 2,103 units, compared to 1,750 from January to July last year.

Richard Hamilton, head of pricing and risk at Zenith, told Fleet News: “Over the next 10 years a combination of hybrid and PHEV will be the primary fuel type as manufacturers incorporate battery technology to improve efficiency and generate less CO2 and NOx emissions.

“Vehicle emissions have created a lot of negative press recently as the Government looks to comply with EU air pollution limits across the UK.”

Orders for diesel vehicles have tracked gently down over the past couple of years at Zenith. They accounted for 88% of the fleet mix in 2015 and are running at 73% in the year-to-date.

Over the same period, petrol registrations have grown from 9% to 21% year-to-date, accounting for the majority of the shift.

Hamilton continued: “Petrol hybrid has moved from 2% in 2015 to 3% year-to-date and petrol plug-in from 1% to 3%. These characteristics are shared with the rest of the fleet industry, which is gradually moving away from diesel and into a combination of petrol and petrol hybrid.

“Currently, electric vehicles still do not provide enough choice to be a viable alternative to diesel. Improved engines and efficiency alongside a generally lower purchase price are adding to the incentive for people to consider moving into petrol.”

More than half (56%) of UK fleets are already operating at least one alternative fuel to traditional petrol and diesel models or are planning to do so in the next three years – an increase of 6% since 2015. That’s according to recent research from Arval’s Corporate Vehicle Observatory Barometer (CVOB), which covers 3,847 fleets.

Shaun Sadlier, head of Arval’s Corporate Vehicle Observatory in the UK, said: “It is obvious that the twin dominance of petrol and diesel that has characterised the company car and van sector for many, many years is being challenged by credible alternatives.

“Modern fleets are moving towards a portfolio of drivetrain technologies and are rapidly becoming conversant in which choices work most effectively in different types of applications.

“We are seeing both a push and a pull effect. On one hand, plug-in hybrids and pure electric vehicles have become much more usable, well-priced and appealing products in recent years while, on the other, we have seen pressure on diesel because of concerns over air quality.”

However, in the UK there is wide variance in the adoption of alternative fuels between smaller and larger companies. While 78% of larger fleets (more than 50 vehicles) are either using them already or plan to, the penetration drops to 66% of medium fleets (10-49 vehicles) and 44% of smaller fleets (1-9 vehicles).

Sadlier said: “There is undeniably a big difference between small and large fleets and it could be that, as an industry, fleet needs to better educate operators of all businesses on the advantages of these new drivetrains. Otherwise, there is a possibility that smaller businesses could miss out on the benefits they bring.”

Current incentives for purchasing ultra-low emission cars in the UK are set until October 2017, and offer up to £4,500 off a zero-emission car, and up to £2,500 off the best-performing plug-in hybrids up to a price ceiling of £60,000.

In July, the Government announced an aspiration to stop the sale of new pure petrol or diesel cars in the UK from 2040 and, although the current programme of incentives for plug-in cars is due to finish within months, the car industry believes they need to continue to ensure Government aspirations are met.

However, German Chancellor Angela Merkel has warned against a swift abandonment of diesel cars after a series of emissions scandals, saying the fuel is still needed if climate change targets are to be met, according to Reuters.

Speaking at a pre-election event on RTL television, Merkel called on German carmakers to work to re-establish public trust in diesel.

Diesel has been the powertrain of choice for most fleets after company car taxation rules changed in 2002, thanks to better fuel efficiency and lower CO2 emissions.

But, with a shift in focus from CO2 emissions to NOx, businesses are finding it difficult to plan the future make-up of their fleet.

The Government has hinted at tax rises after Chancellor of the Exchequer Philip Hammond promised to look at the tax treatment of diesel vehicles, saying he will announce any changes in the autumn budget later this year.

Chris Chandler, principal consultant at Lex Autolease, said: “Uptake of ultra-low emission vehicles has increased significantly over the past two years, fuelled on one side by tax incentives, grants and potentially significant fuel cost savings, and on the other by the increasing availability of more models from manufacturers. The clear commitment from Government for cutting emissions and a growing desire among businesses for a more environmentally-friendly, cost-effective fleet will see this momentum increase.”

Lex Autolease is actively embracing this shift towards alternatively-fuelled vehicles and currently has more than 14,000 on its fleet – including 10,000 plug-in hybrids, extended range electric vehicles and pure electric.

However, Chandler said: “Fleet decision-makers now need to carefully consider the best vehicle and fuel type for the specific drive cycles and applications of their vehicles.

“While electric ranges are still increasing and improvements are being made to our charging infrastructure, new traditionally fuelled vehicles are often still the most practical option for many high-mileage users.” 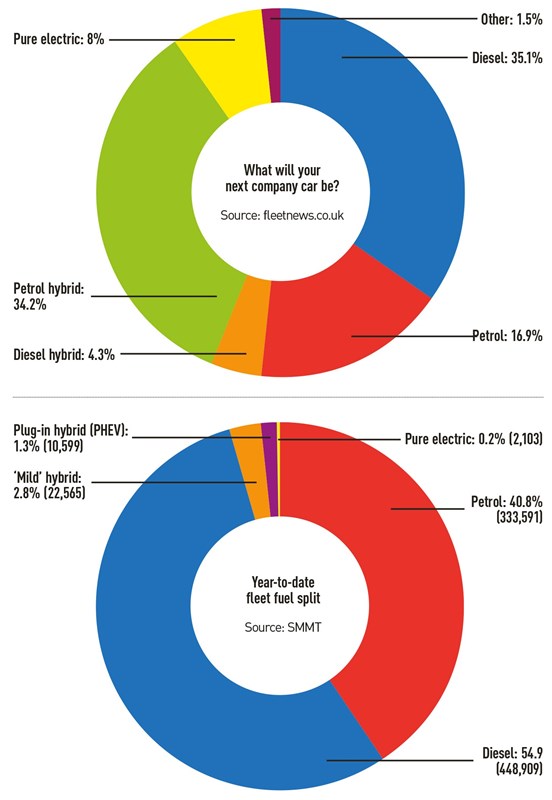