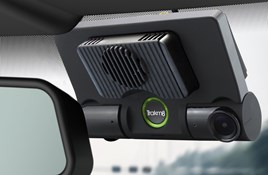 Trakm8 has announced the launch of its new in-cab camera integrated with fully-featured telematics.

The RoadHawk 600 features a choice of single or dual cameras with detachable heads which can be used to monitor the road ahead and the inside of the cab.

It can be configured to automatically provide operators with real-time images and video footage surrounding harsh events picked up by the device’s built-in accelerometer, as well as giving fleet managers the opportunity to live stream footage from the cab.

"We believe that the RoadHawk 600 is the first 4G telematics camera of its kind which provides functionality that we understand can be found nowhere else in today’s market.”

Trakm8 is currently developing advanced driver assistance systems (ADAS) to monitor high-risk behaviours such as mobile phone usage, insufficient concentration on the road, and driver micro-sleeping which will be implemented next year.

The company also intends to incorporate these high-risk behaviours into its driver behaviour scoring algorithms.