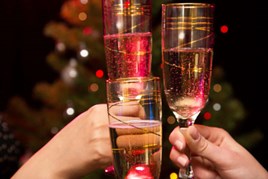 Despite calls from experts to lower the drink- drive limit, the Government believes better enforcement of the current limit - as opposed to lowering the limit itself – is the best way to improve road safety.

But in a survey of 2,000 drivers by AlcoSense Breathalysers, 43% of respondents felt the best way to deal with the problem was to both lower the limit and to step up enforcement.

A further 20% felt the best course of action was to lower the limit even if enforcement remains the same.

Less than one-third (27%) think that the Government’s strategy of better police enforcement on its own would be the best way to tackle drink-driving.

Having reaped the rewards of a reduced drink drive limit in Scotland, 85% of the Scots polled believe England and Wales should also reduce their limit.

The research also showed that despite years of Christmas drink-drive campaigns, the message still isn't getting through to drivers.

A quarter (26%) of motorists admitted that they think they would drive after a few drinks with friends and family this Christmas, knowing they had alcohol in their system, if they felt sure they were under the limit.

Thirteen per cent think they would get behind the wheel even if they thought they might be close to the limit but ‘just about OK’, and 5% of those surveyed would drive after Christmas drinks even though they thought they were at the limit or just over.

Feeling ‘sober enough’ was a reason given by 43%, whilst 38% thought they would ‘probably get away with it’ and 37% justified it by only having ‘a short distance to drive’.

The ‘morning after’ effect is also widely misunderstood, according to the AlcoSense research.

Asked whether they would drive at 7am after a Christmas party the previous evening, where they’d probably been over the drink-drive limit, a quarter of motorists said they would – with women (26%) more likely to chance it than men (23%).

That figure rose to 45% among drivers aged 18-24 who said they would drive despite possibly having residual alcohol in their system.

Nearly one-fifth of drink-drive convictions are for offences the morning after the night before, and a third of all breath tests after an accident are conducted between 7am and 1pm.

When given some data on the likelihood of being involved in a fatal accident, two-thirds of the drivers polled (67%) said the English/Welsh limit should be reduced to 50mg or lower, with nearly a quarter (24%) saying it should be zero. Just 18% said it should remain at the current level.

Hunter Abbott, AlcoSense’s managing director of AlcoSense Laboratories and an advisor to the Parliamentary Advisory Council for Transport Safety, said: “The Government says better enforcement of the law is the answer, yet the number of road policing officers has fallen by 27% since 2011.

“It’s clear from our survey of regular drivers who drink alcohol at least once a week that they want to see the limit reduced as well.

“Even one alcoholic drink can slow your reaction time, inhibit judgement, reduce concentration and affect motor skills such as eye, foot and hand co-ordination – increasing the likelihood of an accident.”

Lack of progress in reducing drink-drive deaths has gone on too long, says IAM RoadSmart

IAM RoadSmart has expressed disappointment in yet another year of no significant change in the levels of drink-driving in Britain, based on new statistics.

RAC backs call for a drop in the drink-drive limit

The RAC is calling on the Government to reduce the legal blood-alcohol limit in England and Wales after a majority of drivers back change back a change in the law.

Sunderland has the highest rate of drivers with drink- or drug-driving convictions on their car insurance policies, according to MoneySuperMarket.