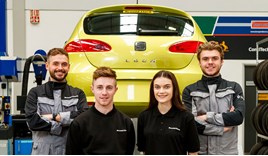 Arnold Clark has announced the launch of an apprentice recruitment drive, with 300 places available to train at an Arnold Clarke site.

The programme offers anyone over 16 years old the opportunity to learn skills and gain a recognised qualification.

The courses run on an Arnold Clark site, but some will also attend a number of weeklong visits at one of the Group’s GTG training centres.

The apprenticeships range from traditional motor trade roles such as technicians and spray painters to roles in IT and customer service.

“It’s important for us to introduce a younger and more diverse workforce to the Arnold Clark team.

“We know that there are still some gaps in understanding; from the age at which the apprenticeship journey can begin, to the benefits it can bring.

“Little by little, we hope to eradicate any misconceptions about apprenticeships, and to raise awareness of them as a viable and hugely rewarding career path.”

Apprentice SQL software developer Michael Carlin said: “I was looking online for work in computing when I came across the Arnold Clark Graduate Scheme.

"I didn’t have the grades to apply for that, but I was delighted to be offered the Modern Apprenticeship.

“I receive training on the job at Arnold Clark’s head office in Hillington, Glasgow. It’s a relaxed environment to work in and everyone’s been really helpful so far.

“It’s great to be learning while getting a wage too, and I’m hopeful that I’ll get another chance to go for the Graduate Scheme once my apprenticeship has finished. I’d advise anyone to go for it.”

This year the recruitment drive will take on a new dimension, with Arnold Clark coming up with new and surprising ways to provide potential apprentices with more information about the available roles during Scottish Apprenticeship Week.

Candidates should have, or should be currently studying for, Standard Grades (1–4), National Grade (4/5) or GSCE (A–C) in subjects relating to the apprenticeship. The deadline for applications is March 9 2018.

The company he founded in the 1950s, Arnold Clark Automobiles, announced he had died peacefully at home today (Monday, April 10).

Independent Motor Auctions has secured a remarketing deal with Arnold Clark, boosting the quantity of its used stock at its Blackpool facility.