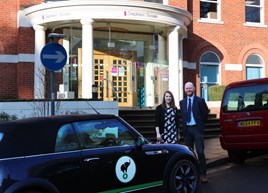 The company, which has offices in Devon and Cornwall, is using the technology to monitor and improve driver behaviour.

Each user of the pool car fleet is scored on their driving and are competing in leagues, which helps to incentivise and encourage better drivers.

Jaime Thornton, office manager for Stephens Scown in Exeter, said: “The pool cars are being used every day and it has become a competition between individuals and our three offices to see who will achieve the best score.

"I’ve noticed that my colleagues are coming back from a drive feeling proud of having achieved such a high score”.

Since Lightfoot went live in the pool cars in December, Stephens Scown drivers have achieved an average score of 88%, with its Exeter based drivers reaching a score of 92%.

Lightfoot recognises Elite Drivers as those achieving a score of 85% and above, which brings about benefits such as increased safety, reduced fuel consumption and less vehicle wear and tear.

Thornton added: “It is clear that Lightfoot focuses on the wellbeing of the driver and we have already started to see its benefits, such as improved safety and great cost reductions.

"We look forward to a continued partnership with Lightfoot as we work to make Stephens Scown even more sustainable.”

The availability of better telematics data means that a more targeted approach should be the future of driver training, according to Arval.