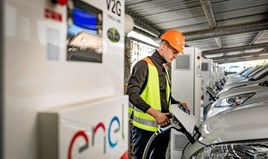 The Government announced that 21 projects had won a share of almost £30 million to develop so-called vehicle-to-grid (V2G) technology, and demonstrate whether it can be commercially viable, through large-scale trials.

The projects involve more than 50 organisations from both the energy and automotive sectors, trialling more than 2,700 vehicles across the UK.

If successful, EV fleet operators and plug-in company car and van drivers could benefit by selling electricity back to the grid during times of peak demand.

Ian Cameron, head of innovation at UK Power Networks, explained: “Electric vehicles are, effectively, energy resources on wheels, so there are tremendous opportunities to explore how electricity networks can utilise any spare capacity in those batteries to benefit our customers.”

V2G technology allows EVs to be fully integrated into the grid via ‘two-way’ electric car chargers. Connecting an EV to the grid to charge the battery during low-demand, cheap tariff periods, drivers or fleet operators then have the option to sell the electricity stored in the battery back into the grid at a higher rate, during peak-demand. The vehicle becomes a mobile power station.

“As fleet operators weigh up the move towards converting to low emission vehicles, this technology could see fleets generating an additional income stream while they are parked in depots and car parks,” said Cameron.

“Selling electricity back to the network could help boost the business case for major operators, making the large-scale adoption of electric vehicles more viable.”

UK Power Networks has more than 30,000 of those EVs connected to its networks and by 2030 it anticipates that figure will rise to between 1.2-1.9m.

It is involved in four projects which together received £11m of the £30m funding from the Department for Business, Energy and Industrial Strategy (BEIS) and the Office for Low Emission Vehicles (OLEV).

They include: Bus2Grid, a project to install V2G bays in a 30-bus garage; Octopus PowerLoop, a domestic customer V2G trial; and e4Future, a 1,000-vehicle V2G fleet trial led by Nissan.

The carmaker estimates that vehicle-to-grid charging could be worth £600 per year to drivers (Fleet News, May 26, 2016). However, the potential to get a return is even greater for vans which are parked at the depot overnight; and the money would then be coming direct to the company rather than the driver.

It suggested a fleet operator could make as much as £1,000 a year per vehicle if it was plugged into the grid every night.

Nissan launched the world’s first fully commercial V2G hub in Denmark in August 2016, in partnership with the energy company Enel and Nuvve, a V2G services provider.

Its latest project, e4Future, was awarded £9.8m to evaluate the commercial offer for EV fleet operators through a trial involving 1,000 V2G charge points, which will be installed over the next three years.

Nuvve, Northern Powergrid, UK Power Networks and National Grid are involved in the new project, along with academics from Newcastle University and Imperial College London.

Claire Spedding, head of business development at National Grid, explained: “Part of the demonstration project will include assessing whether EV owners are incentivised enough financially to provide power back to the grid when required, and help determine if any regulatory or policy interventions are required.”

EDF Energy’s ‘V2GO’ scheme, will similarly demonstrate how energy stored in EV batteries could be borrowed by the electricity system during peak hours, before being recharged during the off-peak in time for their drivers to set off on their next journey.

Led by EDF Energy R&D UK, V2GO will use 100 electric fleet vehicles (cars and vans) in Oxford from a number of organisations including several delivery and taxi companies.

The project will develop, trial and evaluate potential business models for fleet operators’ use of electric vehicles and their suitability for two-way charging.

The consortium is made up of eight organisations with expertise in energy and power markets and systems, fleet operation value chains and electric mobility.

“Think of like Royal Mail,” said Alex Baker, managing director of Fleet Innovations. “They are predominantly doing most of their work during the morning into the early afternoon, so they’ve got the capability to park all their vehicles up at four o’clock in the afternoon.

“They’ll be vehicles that come back with 50 or 60% of their charge left. The National Grid wants some energy; Royal Mail sells the energy in its vehicles to the National Grid for two or three hours, and the grid takes down to 5% or 10%.

“Then, between, say, eight o’clock and four in the morning, you put energy back into those vehicles and away you go.”

Experts also believe vehicle-to-grid charging could play an important role in helping to ‘balance the grid’; making sure there’s enough electricity in the network when it is needed, so the country does not suffer a ‘blackout’.

The Energy Saving Trust is a member of a consortium being led by Octopus Energy, which aims to understand the impact of a widespread EV rollout on the UK’s electricity grid.

The £7m project, which received £3m in Government funding, will install 135 V2G chargers in a ‘cluster’ to assess drivers charging their vehicles at home.

Transport minister Jesse Norman said: “As the number of electric vehicles grows and their battery capabilities increase, there is a huge opportunity for them to make a significant contribution to a smart grid.

“Just like the visionary designs of Brunel and Stephenson in transport, they could revolutionise the ways in which we store and manage electricity, both now and in the future.”

The minister also hopes that the £30m investment will help deliver on the Government’s ambition, set out in recently published Automotive Sector Deal, to be at the forefront of low-emission and EV production and innovation.

NewMotion has installed public charge points that can charge EVS and deliver electricity back to the grid by using Vehicle to Grid (V2G) technology.