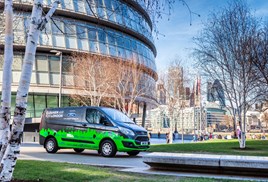 The Chancellor, Philip Hammond, has said that the Government will consult on reducing Vehicle Excise Duty (VED) for low-emission vans during today's Spring Statement.

The move was welcomed by the fleet industry. Claire Evans, head of fleet consultancy at Zenith said: "The move should accelerate a trend towards cleaner diesel LCVs that is already being driven by the introduction of ULEZs throughout the country, with London the first in 2019.

“LCV fleets are already considering the need for cleaner vehicles, and we can expect increased demand for Euro 6 vans. Under ULEZ rules any diesel vehicle other than a Euro 6 will attract an additional fee for driving into the centre of the capital. Other cities are considering their own plans, which may or may not include LCVs. Any further tax incentives that would support the move to cleaner vans are welcome."

Matthew Walters, head of consultancy and customer data services at LeasePlan UK, said: “This is welcome news. As a founding member of the EV100 initiative, LeasePlan is committed to low emissions. We strongly believe that vans should be part of this conversation as much as cars.

“However, it should be noted that the Government has already launched several consultations in this area – including one on electric vans – but is yet to announce the outcomes of them. If the Chancellor is to help us deliver on What’s next, then he needs to start confirming some of his policies.”

Chris Chandler, principal consultant at Lex Autolease added: “The consultation on reduced VED rates for the cleanest vans has the potential to be positive news for fleets. With new lower emission models coming on line, now is a good time for van fleets to start thinking about going green. We encourage customers to engage in the consultation, making it clear that the latest Euro 6 diesels remain the most practicable option for many.”

RAC head of roads policy, Nicholas Lyes, said he was looking forward to seeing more detail on the chancellor's VED plan for vans. But, he added: "Motorists will be very disappointed that the chancellor hasn’t addressed the issue of the condition of local roads in his Spring Statement.

“Put bluntly, before the cold snap the condition of many local roads was on a knife edge with many councils struggling to fix our roads properly. But now, as a result of the ‘beast from the East’ some local roads will have deteriorated even further, possibly to the point that they represent a serious risk to the safety of users.

“Figures from the RAC reveal that pothole-related breakdowns soared in the first week of March following the bitterly cold spell the country experienced. Our patrols attended some 218 call-outs per day on average between 4th March and 6th March, a rise of 110% on the period in the run-up to the cold spell.

"It’s disappointing that emergency funding has not been made available, but it’s a matter of urgency that the Government starts to look at the issue from a long-term point of view. This means that a funding strategy to address both prevention and cure, and certainty for local authorities so they are able to plan ahead.

“We calculate that if the Government was to ring-fence 5p a litre from existing fuel duty revenue, this could provide £11.8bn over five years. This would go a long way to fixing our roads as the one-off cost of bringing them back to a fit-for-purpose state is independently estimated to be in the region of £12bn."

There were no big tax announcements in the Spring Statement, they will be announced in the Autumn Budget, instead the chancellor focussed on the health of the UK economy.

The UK economy, he said, was growing at a slightly faster rate than predicted in November and borrowing is down. Growth will be 1.4% this year, 0.1% higher than forecast, with the forecast for 2019 and 2020 unchanged at 1.3%.

Borrowing, he said, was due to fall in every year of the forecast and he told the House of Commons debt will fall as a share of GDP from 2018-19. There was "light at the end of the tunnel" for the UK economy, he said.

The fleet industry is asking for more clarity on the direction of travel for the future of company car taxation in the Spring Statement on March 13.