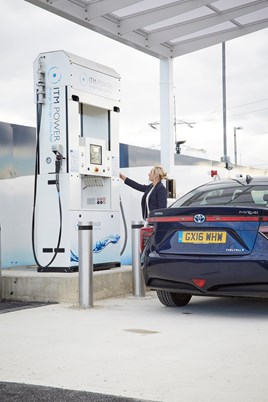 A consortium including ITM Power, Shell, Toyota, Honda and Hyundai has won £8.8 million in funding from the Department for Transport to expand the UK network of hydrogen refuelling stations.

The £8.8 million grant will be matched by a further £13.1m investment including support from the companies and other sources.

“Hydrogen has huge potential, especially for those making longer journeys and clocking up high mileage.

"That is what makes this project truly exciting. Not only is it demonstrating the technology in action, but it is also developing the refuelling infrastructure needed for the future.”

Dr Graham Cooley, CEO of ITM Power, added: “This project will deliver the largest expansion of the hydrogen refuelling infrastructure ever undertaken in the UK and is a very significant step forward for the UK hydrogen industry.

"Our partnership with Shell, Toyota, Honda, and Hyundai constitutes a highly coordinated roll out of hydrogen vehicles and refuelling infrastructure.”

The new refuelling stations will be built in Southwark, Isleworth, Birmingham and Derby.