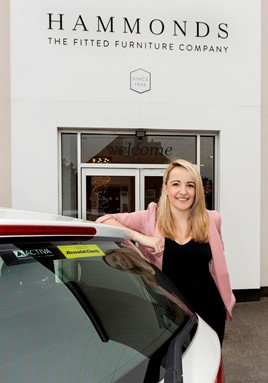 Activa Contracts has announced an outsourcing fleet deal with family furniture business Hammonds, to give its company car drivers a “wider choice”.

The company called Activa in as it had historically supplied it with vehicles, and it advised on the way forward.

As part of the deal, Activa Contracts has supplied six diesel Citroen Berlingo vans and has become an  extension of Hammonds’ fleet operation with fleet co-ordinator Charlotte Eccles-Gray (pictured) taking on increased responsibility for the company’s HGV fleet, which numbers 10 tractor units and 12 trailers, with hopes that this year she will become a qualified transport manager.

Furthermore, Hammonds is just completing a trial of Lightfoot in-vehicle driver behaviour technology, which is part of Activa Contracts’ suite of vehicle and driver risk management solutions available to customers.

The vehicle choice list, which has four grades, is based around vehicle ‘effective rental’.

Eccles-Gray said: “Keeping our company car drivers happy is very important to the business. Since introducing the new expanded policy the feedback from employees has been very good.

“Load space is particularly important to them and the choice now available, such as the BMW 1 Series and Volvo V40 and V60 is proving popular.”