All new diesel-engined cars fail to meet EU standards in real-world driving for NOx emissions, research by the International Council of Clean Transportation – the environmental group which exposed the Volkswagen scandal - has shown.

Petrol cars fared better, however, with all Euro 6 petrol models receiving a ‘good’ or ‘moderate’ rating.

The ICCT carried out emissions tests on more than 700,000 cars and 4,850 vehicle models, nearly all designed and built to Euro standards 3-6, across Europe. The initial dataset comprises samples collected in France, Spain, Sweden, Switzerland and the United Kingdom, and pooled together in the CONOX project, funded by the Swiss Federal Office for the Environment.

In London, for example, researchers used remote sensing technology to measure the emissions from more than 100,000 vehicles during a five-month sampling campaign that stretched from November 2017 through March 2018.

Measurements were made on a total of 45 days at nine locations throughout the Greater London area.

All results have been put into a searchable database by the Real Urban Emissions Initiative (TRUE), which aims to bring transparency to the public debate on vehicle emissions and urban air quality.

The ratings system is based on a methodology developed by ICCT, and involves passing a beam of light through a car’s exhaust emissions from a sampling location on the road. Automatic number plate recognition technology is used to determine which model of car is being tested.

ICCT says this method of monitoring real-world vehicle pollutant emissions is difficult-to-impossible to cheat or game. 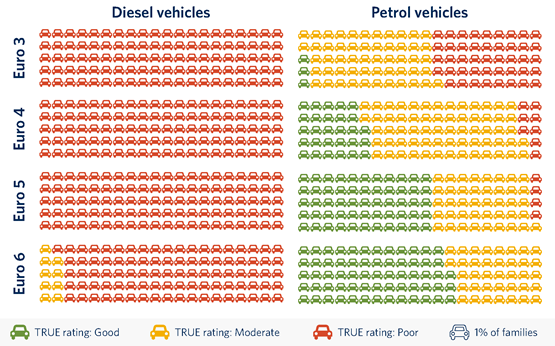 Cars are ranked in a three-colour rating system to indicate their real-world NOx emissions.

Green indicates less than 90 milligrams of NOx per kilometre, yellow indicates between 90 and 180mg/km and red for in excess of 180mg/km.

No Euro 6 standard diesel engine received a green rating, while BMW was the only top-selling brand to achieve a yellow rating for its diesel cars.

The study found that Euro 5 diesel families performed particularly poorly. All had NOx emissions at least twice the limit, and the worst had emissions 18 times the limit.

Nick Molden, chief executive of Emissions Analytics, which publishes a different emissions rating system called the Equa Index, told The Guardian the True rating is a “brilliant” screening tool and also good at monitoring pollution from cars as they get older.

However, he cautioned that True, which averages the same models across several years, will not show when the latest model has significantly cut its emissions. Molden highlighted a Mercedes-Benz model that improved significantly between 2014 and 2017.

“It went from quite dirty to really quite clean,” he added.

Researchers claim to have had interest from a number of manufacturers who want to fit it to their diesel cars.

Sergio Marchionne, chief executive of Fiat Chrysler Automobiles (FCA), has confirmed the brand will phase out diesel cars by 2021 in Europe.

Health damage effects associated with car and van emissions is costing the NHS and society £6 billion each year, researchers at the University of Oxford and University of Bath have found.