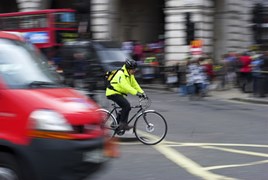 The Department for Transport (DfT) has launched a consultation on whether a new law equivalent to causing death by dangerous driving should be introduced for cyclists.

It is also looking at updating the Highway Code to include measures to counter the dangerous practice of ‘close passing’, which it says puts people off cycling, and would benefit other vulnerable road users like horse riders.

The measures follow the launch earlier this summer of a UK-wide initiative to help police crackdown on dangerous drivers who pass cyclists too closely in a two-pronged approach to make our roads safer.

They also come a year after cyclist who knocked over and killed a 44-year-old woman in east London last year was cleared of her manslaughter.

Transport minister Jesse Norman said: “In recent weeks we have announced a range of measures designed to protect vulnerable road users such as cyclists and pedestrians. These include new measures to combat close passing, training for driving instructors, better collision investigation and £100 million in new investment through the Safer Roads Fund.

“Now we are taking further steps. These include a consultation on new cycling offences, further work on national guidance on cycling and walking infrastructure, and improvements to the Highway Code.

“All these measures are designed to support the continued growth of cycling and walking, with all the benefits they bring to our communities, economy, environment and society.”

In 2016, three pedestrians were killed and 108 seriously injured after being involved in collisions with pedal cyclists.

However, the road safety charity Brake said that, while the intentions behind the Government’s announcement were sound, they are trying to fix a “fundamentally flawed” legal framework.

“All too often families are denied justice, with drivers who kill let off with pitifully lenient sentences, and the public endangered through dangerous drivers evading driving bans.

“The Government must review all road safety law to protect the public and deliver justice for the families of those devastated by road death.”

Paul Loughlin, a solicitor in motoring law at the national firm Stephensons, added:  “The introduction of legislation to tackle the issue of dangerous cycling would be a welcome development and provide an opportunity to close a significant gap in British law. However, it’s also important that this consultation goes hand in hand with a broader review of how we can afford stronger legal protection not only for pedestrians, but also the cyclists and motorists using Britain’s roads on a daily basis.”

As part of the Cycling and Walking Safety Review, the Government has commissioned the Cycle Proofing Working Group to develop national guidance and best practice for cycling and walking infrastructure, so that all road users can benefit from the best facilities.

It has also announced that £1m will be provided to support the pathfinder demonstration projects for repairing and upgrading sections of the National Cycle Network (NCN).

Separately, the Department for Transport has also announced that it is gathering evidence on the effectiveness of current laws on pavement parking to address safety issues concerning cyclists, pedestrians, and other vulnerable road users.

The consultation on causing death or serious injury when cycling closes on November 5. To have your say, click here.

The Government has outlined plans to help people to walk and cycle more, as it hopes to persuade drivers to leave their cars at home for shorter journeys.