The latest news on the changes to the Plug In Car Grant scheme (PICG) have caused consternation and fuelled the discussion that there is minimal understanding of the importance of the automotive industry to the economy overall.

Removing the grant for all AFV’s that have a CO2 rating of over 50g/km will have a serious impact on the popularity of these cars.

This could mean that sales of petrol and diesel models that are cheaper to buy on the whole, will increase in the immediate future and there will be less uptake of the new technology by the fleet market.

However, given that one would hope the Government has planned this properly, considering all eventualities and keeping in mind the need to move out of all fossil fuel propelled vehicles by 2040, then this could be seen as a good sign.

This will further push the manufacturers to accelerate the investment in technology to bring fully electric vehicles and hydrogen fuel cell cars to the market sooner than before.

But, as ever the immediate impact is not appealing.

The September new car market saw the impact of the previous months WLTP driven registration frenzy and the total market was down 20.5% on the same month last year.

This has pushed year to date registrations down to 7.5% below the 2017 figure and the prognosis for the rest of the year is not so good either.

With so many manufacturers forcing through non-WLTP compliant cars in recent months, there is now a shortage of new cars stock.

As such the market is likely to finish at 6.5% down on the full year figure for 2017 as predicted by Cazana.

The chart below shows the decline in sales year to date in 2018 in comparison to last year for the top 10 manufacturers:-

From a fleet perspective, the new car market has been difficult to say the least.

Fleets that have changed their cars have been doing so for typical “business use only” cars rather than the plethora of perk car and user/chooser drivers.

This has been due to the fact that drivers that do have a choice have been seriously considering their options.

There are many perk users that are seeking to move to a cash for car arrangement instead.

This grey fleet will still be reported in many cases as fleet sales which makes this market difficult to identify. Other company car choosers have been holding off getting a new car as they have been confused by the impact of WLTP and their future personal BIK tax liability.

At this point this has not become much clearer although there are high hopes that the budget, now brought forward to October 29th, may quantify matters although there are many that feel that there will be too much focus on Brexit negotiations for the treasury to properly focus on the automotive industry.

Resolving concerns over BIK policy will result in the release of some pent-up demand but it remains to be seen if the OEM’s will have new car stock to meet improved demand this year.

Bearing in mind the announcement over the PICG scheme it will be interesting to see whether this impacts on the used car market.

The chart below shows the performance of ex fleet hybrid vehicles in the used retail market over the last year: 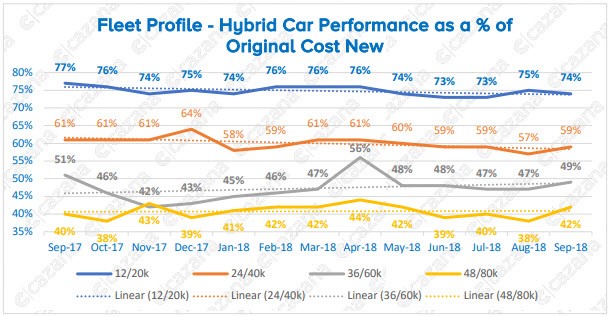 This chart shows the retail pricing as a percentage of the original cost new and to be clear there are fewer data points to be analysed than for traditional fuel types due to the volume of these cars sold in recent years.

Whilst we have seen an acceleration of available product from the manufacturers in the last twelve months, with the incentives to buy these now significantly reduced, the question is whether the used car market will also lose interest.

The data currently shows that in recent months the retail pricing for ex-fleet profile hybrid cars has been improving.

What is interesting is to see that retail prices of the one year and two year age profile cars are on a downward trend.

This may be due to increased volumes coming to the exceeding retail demand which is very probable given the limited hybrid benefit in relation to cost and acceptability.

This will be an important fuel type to watch in the used market as there is every possibility that retail consumer demand and therefore retail and wholesale pricing will decline. In summary, the fleet market has been experiencing a difficult period of late.

The plug-in car grant for ultra-low emission cars will be cut by £1,000 and no longer apply to hybrid cars with a range of less than 70 miles, from November 9.

The company says that future additions are looking very unlikely in the current circumstances.