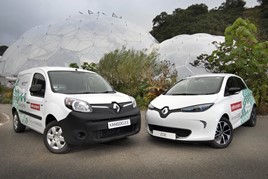 The Eden Project has continued to drive education on EV benefits with a new fleet of 100% electric Renault Zoe and Kangoo ZE models.

Compared to equivalent diesel and petrol vehicles, its original Renault EV fleet saved nearly 17 tonnes of CO2 since 2016, clocking up nearly 94,000 miles in and around its facility.

A number of the vehicles will also be assigned to help with the provision of on-site medical support and transporting less able-bodied visitors around the site.

Renault UK’s electric vehicle project manager Ben Fletcher said: “Not only have the vehicles helped the Eden Project perfectly illustrate the real-world benefits of electric vehicles, notably saving nearly 17 tonnes of CO2 emissions in two years, but at the same time have kept their operations running smoothly due to their immense ease-of-use and and flexible charging options.”

The supply of the new fleet strengthens the partnership between the Eden Project and Renault, which has seen the automotive manufacturer become the Official Car Partner of the Eden Sessions, a series of outdoor concerts by world-famous acts held at the venue.

Eden Project’s marketing director Rita Broe said: “The electric Renaults are the backbone of the Eden Project, playing a vital role in the operations of nearly every team here.

"The beautiful fleet of vehicles suits our purposes perfectly, doing everything we need them to do while having minimal impact on the environment and communicating important messages about sustainability to our visitors.

"We’re very grateful to Renault for their ongoing support of our work."