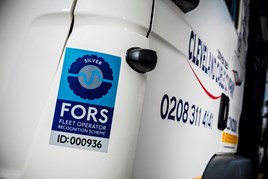 It says its voluntary accreditation programme is now more accessible and relevant to all vehicle types, thanks to changes made to its auditing process.

Graham Holder, head of compliance at FORS, explained that, when the programme was launched, it was called the ‘Freight’ Operator Recognition Scheme before becoming ‘Fleet’.

“Fleet incorporates all (vehicle) variants so the way version five (the latest FORS standard) is now delivered is specific to the variant we’re talking about,” he said.

“You’ll find a drop down (menu) for risk assessments that cater for everything from a heavy 44-tonne articulated truck down to a powered two-wheeler scooter that is delivering pizza.”

Historically, the auditing process did not have that flexibility, which meant it was not relevant for all vehicle types. “Version five opens it up,” says Holder.

The current vehicle make-up of members is truck heavy, with around 60% operating trucks, 30% vans and the remainder running coaches and buses. That’s not surprising considering the work-related road safety scheme was borne out of a desire to improve the road safety of trucks in the capital by Transport for London (TfL).

TfL launched FORS in April 2008, but, having grown beyond the confines of London, it was rolled out nationwide in 2015.

The accreditation programme is run by Aecom in partnership with the Chartered Institute of Logistics and Transport (CILT), while the Governance and Standards Advisory Group (GSAG), consisting of industry stakeholders, enforcement bodies and fleets, including Tarmac, DHL and Travis Perkins, decides the requirements set out in the FORS standard.

Today, FORS has more than 5,000 members, operating 130,000-plus vehicles, who can be awarded Bronze, Silver or Gold accreditation.

Paul Wilkes, business services manager for FORS, would not be drawn on how the wider appeal of the programme could specifically impact membership numbers, but acknowledged there was “good potential for growth”.

He explained: “Most fleets tend to run a mix of vehicles, anyway, and people want to run the same standard across everything.”

However, he admitted that making a “one-size fits all standard, which is impactful and useful for different fleet types”, had posed challenges.

“We’ve tried to create flexibility, while at the same time keeping that single standard, and I think we’ve succeeded,” he said.

Version five was revealed at the annual FORS members’ conference, last month. Having made provision for a broader range of operations and vehicles, the revised standard, which comes into force from January 2019, also addresses the need for air quality improvements and sets out requirements to help operators mitigate against threats of terrorism.

Director John Hix said: “FORS has always been committed to promoting continuous best practice, both in the progressive nature of our accreditation and in the way we work to ensure our requirements remain relevant.”

In terms of the Bronze award, the new counter-terrorism requirement has been introduced, meaning operators must have a policy and supporting procedures in place at FORS Bronze, which names a Counter Terrorism Champion.

Under new Bronze training requirements members must also have completed the current FORS Professional Security and Counter Terrorism eLearning module within the 24 months prior to audit.  Since its launch in January 2018, the module has been completed by more than 15,700 individuals.

Hix said: “With the terrorist threat ongoing, it is more important than ever that we all play our part in tackling the dangers to personal and vehicle safety.”

Key changes for FORS Silver and Gold include an added emphasis on improving environmental operating standards, with a requirement at Gold for drivers to have completed either the FORS Professional LoCITY Driving training course, or a FORS-approved environmental awareness course within the past five years.

Hix concluded: “FORS has grown from a relatively-small London-centric operation, to encompass well more than 5,000 members of diverse fleets nationwide.

“With this truly national remit, it is vital FORS is flexible enough to meet the evolving challenges our members face and to help operators striving for continuous operational excellence and best practice.

“We are confident the new standard moves our members forward on this course.”