Roadside recovery industry calls for changes to the Highway Code 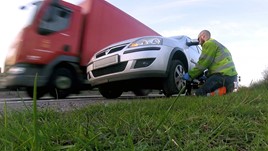 A campaign has been launched aimed at improving safety for those who work at the roadside.

Called Slow Down Move Over (SDMO), it is intended to bring drivers and fleets running cars, vans and trucks together with a unified approach to build a cultural awareness among road users when presented with a temporary hazard.

Further down the line the people behind SDMO hope to influence changes in the Highway Code.

One of the instigators of the campaign is Service on Site managing director Paul Anstee who has spent 29 years working in the vehicle recovery business.

He said that working on the roadside is like “playing a game of Russian roulette”.

“It’s like putting one bullet in a revolver, putting it to your head and pulling the trigger,” he said.

Anstee has witnessed and experienced his fair share of near misses, when working on the roadside – including being hit by a door mirror.

In 2016, one of his employees was hit by a vehicle and when he arrived to find paramedics and an air ambulance there, he feared the worst.

“I do adrenaline sports, so I am no stranger to feeling scared,” he said. “But, picking that phone up and ringing his wife to say ‘I don’t know what’s wrong with him, but they’re rushing him to hospital’, was the scariest thing I have ever done.

“The police officer had to take the phone off me because I had gone white. I didn’t know if he was going to live or die at that point.”

The employee suffered a broken leg, but the outcome could have been much worse.

“It was a massive wake-up call for me, and I don’t want anyone else to experience that. That’s why I started this campaign,” explained Anstee.

SDMO has been spearheaded by Anstee and Baz Cooper of BSC Recovery. They have been joined by Ben Johnson, director of networks at Call Assist, who linked up with the awareness group last year following the death of a roadside recovery worker on the M69 in 2017.

Christopher Hadland was killed following a collision between his recovery truck and a Transit van. The driver of the Transit, Ashley Wilkes, pleaded guilty to charges of causing death by dangerous driving and causing serious injury by dangerous driving.

Johnson said: “People don’t register what’s around them when they’re driving nowadays. They don’t slow down and then they pile into them (recovery workers). You would be surprised how often it happens.”

In the same year, another roadside recovery driver died at the scene of a breakdown on the M25 when he was hit by an articulated lorry.

The SDMO group has already gained support from independent operators and companies such as Allianz Partners, LV Britannia and Axa, resulting in a website launch last July – www.slowdownmoveover.uk.

However, Johnson says that is just the beginning. He added: “Eventually, SDMO would like to take its campaign to Government and rally for changes in the Highway Code, but we are realistic with our aims.

“We are looking at the transport sector as a whole with a focus on fleet drivers, as they are the ones getting the miles in, alongside haulage companies who are often, unfortunately, involved in these types of RTCs (road traffic collisions).”

While Anstee and Cooper remain at the core of the group, they feel it should be representative of all areas of the recovery industry including independent vehicle recovery operators, trade associations and work providers.

The next step for SDMO will be the building of an online interactive map of near misses (when a vehicle enters the hard shoulder) and collisions, to highlight the frequency at which these events could have or have occurred.

Unfortunately, according to Johnson, there is a substantial amount of red tape covering this type of data collection. He said: “We understand companies do not want to highlight any near misses and collisions, so we are working on creating an anonymous channel. That way, we can build a body of statistics to highlight and support SDMO’s campaign, making for a stronger case to present to Government in the future.”

Anstee concluded: “On the hard shoulder you have an average of eight to 12 minutes to clear the way before something or someone is hit. We need to spread the word and ask people to please, slow down and move over.”