20% of drivers experience road rage at least once a week, BigChange finds 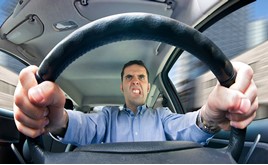 One-in-five drivers experience road rage at least once a week, research from BigChange has found.

The study of more than 1,000 drivers for the mobile workforce technology company also found 6% get it every day.

Road rage was most common among drivers aged 18-24, with 42% admitting they got angry at the wheel every day.

Martin Port, CEO of BigChange, said: “Our research shows that road rage is a major problem on UK roads, and while certain groups are statistically more likely to experience it than others, it is an issue that can potential affect everyone.

“We know that road rage, alongside workplace stress and the pressure of running late for appointments, is a major contributor to dangerous driving behaviours on UK roads.

“People who plan ahead and leave a little more time for their journeys tend to experience less stress while driving and pose less risk to themselves and others.”

The survey was conducted by consultancy Opinium and published as part of Leaders for Live, a new campaign to help business leaders promote safer driving at work.

IT found female drivers were more likely to experience road rage than men.

More than a quarter (27%) of women who drive regularly for work admitted to getting road rage at least once a week, compared to less than a fifth (18%) of men.

Paul Hackett, founding Partner of The WellBeings.London, a health and wellness insight-led growth consultancy, added: “Working hard, late-night shifts, tight deadlines are among the litany of workplace factors that have a psychological impact on employees.

"If those employees then carry their stress with them behind the wheel, we know the likelihood of them driving erratically is significantly higher.

"A stressed or anxious driver’s heart rate can accelerate from a typical 70bpm to over 180bpm; a dangerously high rate for many.

"Anger narrows a driver’s focus of attention, most often resulting in the driver becoming territorial and impatient – which, in turn, means the driver is more likely to speed or commit other inappropriate driving behaviour.”