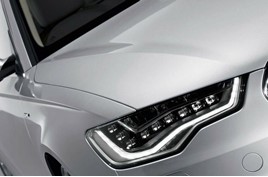 Daytime running lights on vehicles may be causing unintended confusion for other drivers, according to research carried out by the RAC.

Designed to make cars more visible to other road users in daylight conditions, they have been required on all new EU cars and small vans since early 2011 to improve road safety.

The lights automatically switch on when the engine is running and switch off when the main headlights are turned on.

They are not designed to help drivers see where they are going, but are there purely to enable other road users to see the vehicle. This is why they are considerably dimmer than dipped headlights.

But while all new vehicles have to have daytime running lights at the front, it is not a requirement to fit them at the rear, yet some manufacturers choose to do so.

It is this issue, says the RAC, that appears to be causing confusion and frustration for road users in dull driving conditions as many drivers don’t turn on their dipped lights or sidelights, perhaps mistakenly thinking that because they have daytime running lights on automatically at the front the same applies to the rear lights.

An RAC Opinion Panel survey of 2,061 motorists found that more than six in 10 (62%) claimed to see other cars and vans driving in dull overcast conditions without any rear lights on, while they noted these vehicles did have lights on at the front.

RAC road safety spokesman Pete Williams said: “This is potentially a very worrying finding as it implies that many motorists are driving without any rear lights believing that because they have running lights that switch on automatically at the front, they are also on at the rear.

“Alternatively, and arguably just as concerning, these drivers could simply have decided the light conditions were not bad enough to merit turning on their dipped lights or sidelights.”

Asked if they knew whether the car they drive most frequently had daytime running lights nearly half (47%) stated that their vehicle did not, 29% said theirs had them at the front only, 14% said they had them at both the front and the rear, and somewhat worryingly, 8% knew they did at the front but were unsure about the rear.

Daytime running lights originate in the Nordic countries where winter light levels are usually low, even in the day.

Sweden was the first country to require them, making them mandatory in October 1977.

Studies into the effectiveness of daytime running lights regarding road safety have had varying results.

An American study from 2008 put the figure at a modest 0.3%, however when the EU investigated the issue in 2003 it suggested there was a likely reduction in multi-party collisions of between 5% and 15%.

While EU law required all cars and small vans produced since 2011 to have daytime running lights, trucks and buses were not included in legislation until August 2012. Vehicles produced before these days do not have to be retrofitted.

Williams continued: “While daytime running lights are clearly bringing a very valuable safety benefit to the UK’s roads, it would be good for every driver to take just a few minutes to make sure they know whether the vehicles they drive have them or not. And if they do, then check to see if they have them at the rear as well as the front.

“That way those that don’t have them at the back will be far more likely in poor daylight visibility to switch on their dipped lights to make their vehicle more easily seen from behind.

“We strongly urge everyone to carry out this check as those few minutes could make an important road safety difference.”

Almost half of UK drivers (48%) do not understand dashboard warning lights, study reveals

Teletrac Navman has published a shareable guide highlighting 20 illegal habits drivers may not know are against the law.