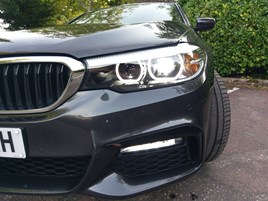 Two-thirds of respondents claimed they were left blinded by oncoming cars using newer headlight technology such as LED or Xenon.

The RAC Opinion Panel surveyed 2,061 motorists and found that six in 10 (58%) motorists think modern vehicle headlights are so bright they risk causing other motorists to have accidents.

Fifteen per cent of motorists claimed they have suffered a near-miss as a result of being dazzled by modern headlights that they believe are too bright.

Of those who claimed to regularly get dazzled by oncoming dipped headlights, the majority felt it takes up to five seconds before they can see clearly again.

Only one in 10 drivers (12%) think the brightness of headlights on most newer cars is about right. Two-thirds (66%) believe some are too bright and a fifth (22%) claim most are too bright.

When asked if there should be better regulation in place to prevent manufacturers fitting vehicles with headlights that are too bright, 80% of motorists questioned by the RAC felt this was necessary. Twelve per cent were undecided, and only 8% disagreed.

All cars sold for road use in the UK have to be fitted with headlamps that conform to standards set by the EU in line with the United Nations’ World Forum for Harmonization of Vehicle Regulations (WP.29). The UN’s Working Party on Lighting and Light-Signalling (GRE), which prepares regulatory proposals on active safety, specifically regarding vehicle lighting and light-signalling, is currently looking at the issue of headlight glare in response to public concerns. The UK is part of this working party.

RAC road safety spokesman Pete Williams said: “The intensity and brightness of some new car headlights is clearly causing difficulty for other road users. Headlight technology has advanced considerably in recent years, but while that may be better for the drivers of those particular vehicles, it is presenting an unwanted, new road safety risk for anyone driving towards them or even trying to pull out at a junction. Drivers also find it very distracting when they have to contend with being dazzled by bright lights in their rear view mirrors.

“While regulations specify that all types of dipped headlights must fall between a maximum and minimum luminosity the night-time driving experience of motorists of all ages is very different with many saying dipped beams of some modern vehicles are too bright.”

As many as one in nine cars have defective or incorrectly adjusted headlights that can temporarily dazzle oncoming motorists.

Drivers are being warned about a dangerous new tactic being employed by criminals running ‘crash for cash’ fraud rings.

The future is bright for bi-xenon and LED headlamps, says Glass's

Fleets considering cars with advanced bi-xenon or LED headlamps need to balance the potential cost of repair against the safety and residual value benefits they bring.