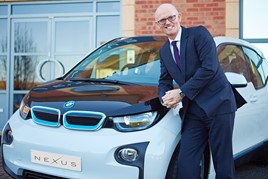 Nexus Vehicle Rental has launched a new damage reporting system, which it says can save its customers money on vehicle repairs.

The new feature within Nexus’s IRIS rental booking and management system sends an SMS link to customers prior to vehicle delivery, enabling them to upload photographs of any damage to their rental vehicle on receipt.

The service is being rolled out to all Nexus customers following its bespoke development for GB Rail.

“There is a worrying trend of rising vehicle damage repairs and we want to provide ways to help our customers save money. Our new damage reporting tool allows client feedback to reach us immediately, allowing the smooth running of operations and preventing customers from being unnecessarily charged,” said David Brennan, CEO at Nexus Vehicle Rental.

According to the Association of British Insurers, vehicle damage costs have increased by 32% over the past three years and are likely to escalate further as safety technology in modern vehicles becomes more expensive to replace.

Similarly, earlier this year Nexus revealed the number of damage claims it has processed due to potholes has risen by 40% since 2016 alone.

Nexus works closely with its suppliers to save customers money on their damage claims, which has resulted in 36% of damage claims being closed.

Nexus provides access to more than 550,000 vehicles from more than 2,000 locations across the UK, enabling customers to make bookings within seconds at the click of a mouse or via smartphone.