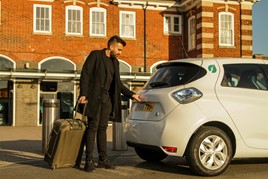 The scheme has brought 18 Renault Zoe hatchbacks to the area, which can be booked for an hour or several days at a time.

Supported by EIT Climate-KIC, Solihull Council and Solihull Community Housing Association (SCH), the new car sharing scheme will see vehicles priced from as little as £3.50 per hour and £25 per day.

He said: “This is a great opportunity for local residents to try electric cars cheaply.  This pilot scheme lets people rent out cars for as little as an hour with no added extras.

“It is an easily accessible and flexible car rental offer which could make a real difference to local people’s lives – while also reducing emissions on our roads.”

The cars include an RFID card access system allowing them to be booked online or via the E-Car Club mobile app, and used by several people throughout the day.

The cars can be booked for any length of time (over one hour). Insurance is included, and the minimum membership age is 19.

Patrick Cresswell, managing director of E-Car Club, added: “We hope this scheme will encourage car owners to consider using the service as an alternative to vehicle ownership.  And that should result in fewer cars on the road, and ultimately reducing emissions and congestion.”

Barking Riverside London has teamed up with Enterprise Car Club to provide on-site vehicles for local residents and businesses.