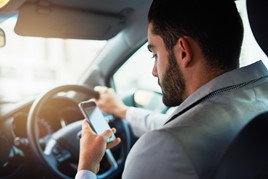 The illegal use of mobile phones among van drivers is double that seen in cars, according to a new Government report.

The highest proportion of drivers using a hand-held mobile phone while driving was among taxi/private hire vehicle drivers (3.3%).

The higher rate for this category is mostly driven by a higher rate in Scotland, which is based on a relatively small sample.

However, the proportion of van drivers using a hand-held mobile phone while driving was twice that of car drivers, 2.1% versus 1%.

The figures, from a 2017 Department for Transport (DfT) survey released this week, show that for car drivers (including taxi and private hire vehicle drivers), hand-held mobile phone use while driving has reduced compared to the DfT’s last survey in 2014.

This latest survey shows that 1.1% of drivers were observed using a mobile phone whilst driving on weekdays in Great Britain. The rate was higher in Scotland (2%) than in England and Wales (0.6%).

The DfT report suggests the reduction could be linked to the change in mobile phone laws in March 2017. However, it stresses that this does not imply causation or prove the effectiveness of the policy.

“It is also important to recognise the vast majority of these surveys were carried out months after the penalty for using a handheld mobile phone at the wheel was increased.

“It stands to reason the ‘fear factor’ of the tougher penalties would be greater in the time immediately after they were introduced.”

Williams also suggested that, because the survey is only carried out every few years, he also fears many drivers who might have changed their ways initially due to the increased penalty may have fallen back into their old ways.

“This isn’t helped by the decline in the number of roads police officers as some drivers aren’t as afraid of being caught breaking motoring laws as they once were," he said.

“It’s also important to remember just how tricky it can be to detect someone using a phone illegally. While some will blatantly drive and hold their phone to their ear, others will be a lot more covert or will only use a handheld phone very briefly – activities which are still dangerous and against the law.”

In December 2003, legislation was first introduced making it illegal to use a hand-held mobile phone while driving or riding a motor vehicle on the road.

In February 2007, the penalty for using a mobile phone while driving increased from a £30 fine to a £60 fine and three points.

If a case goes to court, the driver or rider may be disqualified.

Drivers or riders can use hands-free phones, sat navs and two-way radios when driving or riding, but if the police think they are distracted and not in control of their vehicle they could still get stopped and penalised.

Hand-held use while stationary

The survey also shows that 2.1% of drivers were observed using a mobile phone while stationary in Great Britain (2.2% in England and Wales and 2.5% in Scotland).

Stationary sites were located at traffic light junctions and observed drivers behaviour while the vehicles were stationary (being held by a red light).

Moving sites were located at pavements or laybys to make observations of moving traffic.

Results at moving sites are not directly comparable to those at stationary sites, because drivers’ mobile phone use while stationary at a junction may not be representative of their general use while driving.

In the 2014 survey, 2.3% of drivers were observed using a mobile phone while stationary in England and Scotland (2.5% in England and 1.7% in Scotland).

Williams concluded: “Anecdotally, we still see too many drivers either talking on their handheld phones or interacting with them. And perhaps more worryingly, our own research with drivers suggests the problem has far from gone away.

“As a result we suspect many drivers will be very sceptical of these findings as they don’t reflect what they see on a daily basis.”

Norfolk County Council is trialling road signs that detect when drivers are using a mobile phone.

Women are more likely than men to illegally use their mobile phone while driving, according to research by Select Car Leasing.