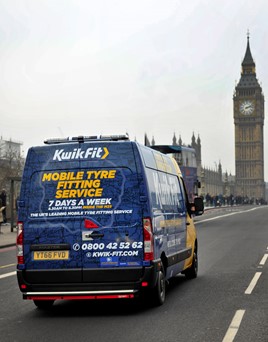 Kwik Fit has expanded its ‘Mobile7’ operation and plans to continue rolling out the tyre-fitting service throughout 2019.

Mobile7 is Kwik Fit’s response to delivering increased tyre replacement capacity and flexibility, with tyres fitted to vehicles in a company car park, at an employee’s home or another location of their choosing.

Kwik Fit launched Mobile7 inside the M25 in 2016 and has subsequently expanded the service into other regions across the UK.

As a result of a substantial roll-out programme over the past 12 months, Mobile7 is now operational in eight further areas outside of its initial London focus. The additional regions comprise: Southampton/Portsmouth/Winchester; Bristol/Bath/Swindon; Birmingham and the West Midlands; Milton Keynes/Bedford; Manchester/Liverpool and the North West; Leeds/Huddersfield/Sheffield and south towards Derby and Nottingham; Edinburgh; and Glasgow.

During the second half of 2019 and into 2020, Mobile7 will be rolled out into a number of other major towns and cities across the UK.

Andy Fern, fleet sales director at Kwik Fit, said: “More and more of our business clients are meeting the demands of their customers by providing a seven-day a week service. In turn, Kwik Fit has reacted with Mobile7 as our customers then also require the same level of support.

“Kwik Fit recognises the increasing demands on drivers’ time and Mobile7 is our response to delivering increased flexibility wherever tyres are required to be fitted and we are receiving very positive feedback from customers about the expansion of the service.”

Kwik Fit operates a 200-strong mobile fleet nationwide, with some of the vehicles carrying the Mobile7 livery. The service operates from 8.30am to 8.30pm seven days a week. Outside the Mobile7 areas, hours of operation are currently 8.30am to 5.30pm Monday to Friday and 8.30am to 1pm on a Saturday.

Kwik Fit says it complements the company’s national network of 600-plus centres that provide a seven-day service.

What’s more, Kwik Fit is developing a new IT platform infrastructure that will deliver a range of enhancements to Mobile7 in the coming months, resulting in an even faster and more efficient service to customers, it said.

Motorists are being urged to regularly check their vehicle’s brakes after Government data showed defective brakes contribute to 10 fatalities a year.

Kwik Fit has won a three-year sole supply contract with SG Fleet UK for the provision of tyres and associated products.