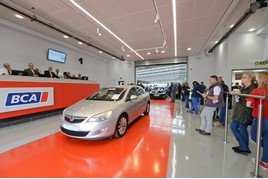 Alphabet International GmbH has announced the extension of its European remarketing partnership with BCA until the end of 2023.

BCA remarket Alphabet International lease returns to motor trade buyers across eight European countries via BCA’s online platform. The two have been in partnership since 2014.

René Lorr, head of international operations, Alphabet International, said: “BCA has ensured that we are very well-positioned in terms of the global remarketing of our lease returns. The integrated software solution, which is directly linked to the wider BCA Marketplace, allows us to deliver a speedy, efficient and transparent remarketing process across Europe.”

Davide Coco, commercial director Europe, BCA, said: “This contractual extension is the result of our successful partnership over a number of years in Europe. We are delighted to be shaping a successful future in conjunction with Alphabet and to offer our customers a steadily growing portfolio of stock in this desirable one-owner vehicle segment.”

Established in 1997 as the UK fleet management subsidiary of the BMW Group,

Alphabet manages a portfolio of about 650,000 leased cars and light commercial vehicles. Nick Brownrigg has been Chief Executive Officer of Alphabet GB since June 2016.

In March this year Alphabet (GB) was highly commended in the Fleet News Awards 2019 Leasing Company of the Year (more than 20,000 vehicles) category.

In June 2018, BCA Marketplace rejected a £1.61 billion takeover bid from London-based private equity firm Apax Partners. Earlier that year, BCA had announced it was trading ahead of market expectation with strong profit growth as the remarketing businesses was successful in winning new contracts and continuing contract renewals.

Motorline has agreed an exclusive two-year remarketing deal with BCA which will see 12,500 vehicles sold annually at BCA’s Paddock Wood site in Kent.