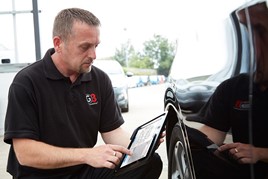 G3 Remarketing has reviewed its appraisal app after hitting 150,000 inspections two years after it was launched.

The AVID (Audio Visual Inspection Device) platform was introduced by the business in March 2017 following 18 months of development.

Used daily by G3’s NAMA qualified inspection team, both on-site and remotely at locations across the country, the application was a cornerstone of the record-breaking year for the business in 2018.

Reaching the milestone of 150,000 appraisals, G3 saw it as an opportunity to review both the data and processes created by AVID.

It says that the inspection team has worked closely with a national SMART repair company to verify the damage estimates used in the system with an accuracy of 96% again current market costs.

G3 consulted with key contacts in numerous industries to get a truer picture of the pain-points that they experience when it comes to vehicle conditions and how they use the appraisal reports.

The stand-out request from finance houses was for further images of damage to use as pictorial evidence for discussions with their customers when it comes rectification.

AVID has now doubled the number of triggers in the system for inspectors to record HD images or videos.  After reviewing the criteria, G3 have now introduced over 500 damage trigger points on vehicles which enforces the inspector to take images which now become part of the pre-sale appraisal report generated for vendors.

The increase in damage media for vehicles will give a far greater level of inspection, covering the condition of the vehicle from all angles with G3’s new detailed appraisal report, says G3.

G3 Remarketing has launched a self-appraisal app, enabling motor finance customers to create and submit their own in-depth evaluation reports.

Independent vehicle auction company, G3 Remarketing, has announced a record-breaking year for the business in 2018.

G3 wants fully hybrid fleet by the end of the year

G3 Remarketing will move its entire fleet over to ultra-low emission vehicles (ULEVs) by the end of the year.