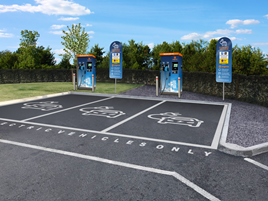 Engenie has announced plans to double the number of electric vehicle chargers in the UK by 2024.

The plans for more than 2,000 rapid charging points are being funded by a £35 million investment commitment from Cube Infrastructure Fund II.

The company says they will be at accessible public sites, including supermarkets and retail parks.

Ian Johnston, CEO of Engenie, said: “The EV market is marching into the mainstream. Private companies are now seizing the EV investment opportunity and nearly 75% of car buyers are considering an EV as their next vehicle.

“Those organisations offering public car parking can position themselves for the future by providing new value to customers and driving increased footfall by installing rapid chargers.

“The EV tipping point is coming and this significant investment commitment positions us at the forefront of this burgeoning market.”

Engenie says it will have rapid chargers installed at more than 100 sites by Christmas.

Last year it partnered with Marston’s Inns and Taverns to roll out 400 rapid chargers at its pubs, M7 Real Estate, and Cardiff City Council.

Earlier this year, analysis from Deloitte found the UK will need 28,000 public charging points in order to service an estimated 7 million EVs in circulation by 2030. There are currently around 13,500 points in the UK.

Poppy Welch, head of Go Ultra Low, the joint government and industry campaign to promote the uptake of electric vehicles, said: “The UK is already home to one of Europe’s biggest rapid chargepoint networks and Engenie’s commitment to adding a further 2,000 units will make it even easier for motorists to access rapid chargers on the go.

"The new rapid chargepoints will be an invaluable addition to the UK’s ever-expanding network.

"With more than 24,000 chargepoint connectors at almost 9,000 locations, there are now more places to charge your car on the go than there are petrol stations.

"The increase in the availability of chargepoints across the length and breadth of the country, including rural locations as well as towns and cities, means it has never been more convenient to own and run an electric car.”

Engenie announced its new partnership with M7 Real Estate to install rapid EV chargers across all of M7’s out of town retail warehouses.