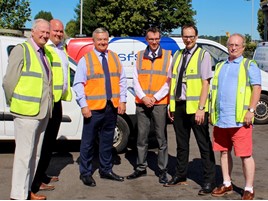 Following a tender process both councils opted to award the seven-year contract (with a possible 7-year extension) for the provision and maintenance of approximately 210 vehicles. The contract was awarded to contract hire and fleet management company, Specialist Fleet Services (SFS).

Stuart Noyce, group manager of street scene and open spaces at Mid-Devon District Council (MDDC), said: “Previously we purchased our vehicles outright and outsourced the maintenance from a number of suppliers.

“The contract with SFS is not only better value for money but much simpler. We have a fixed price with no unexpected costs, which is much better for budgeting, and one point of contact for maintenance.”

He continued: “There are many additional advantages as a result of this increased harmonisation with Exeter City Council such as the ability to share equipment, carry out joint training and use each other’s depots to park vehicles.”

Simon Hill, service lead for fleet at Exeter City Council, said: “During this tender process we compared the costs of contract hire alongside our existing method of fleet procurement.

“The results showed that by contract hiring the vehicles with SFS we will make a saving over the lifetime of the vehicles and also speed up the replacement of older parts of the fleet with newer, lower-emission vehicles from year one of the contract .”

The new fleet will also include a number of electric vans and cars, and the refuse vehicles will be fitted with the latest safety features including reverse radars, cyclist safety equipment and camera systems.

Bob Sweetland, managing director of SFS, said: “We are thrilled to have been selected as vehicle partner by both authorities and we look forward to delivering and maintaining an efficient, cost effective fleet.

“We will be introducing cleaner, greener vehicles, with the first units due in September.”

SFS has been delivering contract hire, fleet and workshop management solutions to the public and private sector since 1992.

With a network of workshops and its own municipal vehicle hire division (CTS Hire), SFS says it can provide the full range of vehicle and plant solutions from short-term vehicle hire to meeting the most complex fleet requirements.

East Hertfordshire will benefit from a fleet of new electric vehicles, available for use through Europcar’s E-Car car sharing platform.