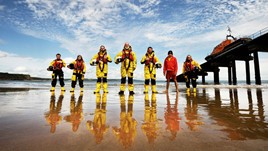 The RNLI runs a fleet of more than 1,000 vehicles, which are used for flood response, fundraising support and lifeguard patrol, around the coast of the UK and Republic of Ireland. The new agreement will initially cover 650 of these vehicles.

Masternaut will be providing CAN bus technology, incident management and fuel monitoring to the RNLI, which reads data straight from the vehicle’s computer, rather than relying on location-based estimates.

This, says the telematics provider, allows the fleet manager to build a more accurate picture of real MPG, fuel consumption and mileage, as well as a clear understanding of safety risks, including speed, acceleration and braking.

The RNLI will also use Masternaut’s smarter driver app, as an HMRC compliant solution for mileage recording, requiring minimal input from the driver.

Furthermore, the charity will be installing Masternaut’s lightbar solution, which alerts the driver as performance thresholds are crossed with LED and audible warnings. This provides ongoing feedback to improve driving behaviour, it says.

Dhruv Parekh, CEO of Masternaut, said: “Optimising fleet operations requires a holistic approach, from choosing the best vehicles, through to understanding how drivers are using them.

“The RNLI has committed to ambitious goals for reducing its emissions output, while protecting the safety of its drivers and the public, and we are looking forward to working in partnership to reach them.”

Nick Saunders, senior procurement category manager, warehouse and logistics at the RNLI, said: “Road vehicles are an essential asset for us in delivering our lifesaving services around the coast of the UK and Republic of Ireland.

“As a charity, it is essential to us that we operate both as efficiently and safely as possible, while minimising any negative impact on the communities we serve.

“We see telematics as an important part of the answer in meeting these objectives, bringing down the cost of operating our vehicle fleet, improving the safety of drivers and other road users, and reducing our carbon footprint.”

The RNLI operates more than 230 lifeboat stations in the UK and Ireland and more than 240 lifeguard units on beaches around the UK and Channel Islands.

It is independent of Coastguard and Government and depends on voluntary donations and legacies to maintain its rescue service.

Since the RNLI was founded in 1824 its lifeboat crews and lifeguards have saved over 142,700 lives.

Michelin has acquired telematics firm Masternaut for an undisclosed sum.

Masternaut has added real-time job tracking to its telematics solution with its On Time tool.