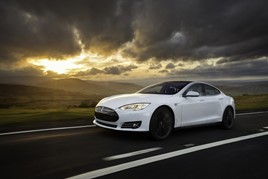 Major UK leasing companies and Tesla have allayed concerns over driver privacy for those choosing its connected car and tracking technologies.

Fleet News has been told that there were concerns the manufacturer was tracking the location of vehicles and customers through a mobile phone app, which they believe is a breach of general data protection regulation (GDPR).

Tesla’s new Model 3 also has an in-cab-facing camera built into the rear view mirror to monitor the cabin for when the vehicles are updated to work autonomously.

However, a Tesla spokesperson said: “Tesla complies with GDPR and handles all customer data in accordance with our privacy policy, which clearly outlines the types of data we collect and the lengths that we go to protect our customers’ privacy in the process.

Lex Autolease, Total Motion and Ogilvie Fleet all confirmed they are still working with the brand and they are confident the vehicles are GDPR-compliant.

Tesla chief executive Elon Musk had replied to a Tesla driver online earlier this year when they raised privacy concerns about the in-cab camera technology.

Musk said: “(The camera) is there for when we start competing with Uber and Lyft. In case someone messes up your car, you can check the video.”.

Musk confirmed the hardware is built into the cars and the brand is finishing off software and waiting on regulatory approval before any ride-sharing or cabin-monitoring functionality is switched on.

Tesla confirmed owners can decide to turn off the in-cab camera. It also said that, until the software update rolls the camera in the cabin is disabled by default.

There is no physical tracker installed in Teslas; however, drivers can track their vehicle through the Tesla mobile app, which uses a GPS system to locate the communications chip in the vehicle.

Total Motion has offered Teslas since the Model S went on sale in the UK in 2014. It has ordered 200 of the new Model 3.

Simon Hill, Total Motion managing director, said: “We are still quoting on Tesla and we have no concerns or issues around GDPR or the camera.

“We have confirmed with Tesla that all the functionality in the cars conforms with European law.”

Nick Hardy, Ogilvie Fleet sales and marketing director, also confirmed it is not concerned about breaches on GDPR and the company has experienced no problems with drivers.

He said: “I can understand there are more general concerns around the future of connected cars and how that data is tracked. It’s something the industry needs to tackle, but you have to accept this higher level of connectivity as vehicles and drivers come closer together.”

Ogilvie said that when Tesla drivers take a vehicle they are asked if they want to connect to the manufacturer’s app and this process was GDPR-compliant.

Hardy said: “We’re all getting more used to giving consent to apps on our phones when it’s something that’s going to be useful.”

A spokesperson for Lex Autolease said there are some in leasing that refuse to work with Tesla due to it being more retail-focused.

The Lex spokesperson said: “We are pleased to be working collaboratively to help them develop a fleet proposition that meets the needs and expectations of corporate customers.”

LeasePlan, Arval, Alphabet and ALD Automotive all declined to comment on whether they are offering Teslas to customers.

Hill said the refusal of some leasing companies to work with Tesla is not down to privacy concerns, but more to do with the manufacturer’s terms of service.

Hill told Fleet News: “Certain leasing companies do not like Tesla because they don’t like the terms of business and they’re using every excuse possible not to support the brand.

“Some are using the fact that Tesla wants customers to go to one of their stores for a handover as another reason they won’t work with them.”

Tesla is known for not offering discounts on large orders of vehicles – something the fleet and leasing industry often expects. It also wants to control the relationship with the driver directly, rather than relinquish control to the leasing company.

“It’s quite difficult to track and trace who has the data and where it’s going,” she said. “Society is changing with increased levels of connectivity, but I think fleets and drivers have a right to be concerned in the wake of things like the Facebook and Cambridge Analytica scandal.

“If we’re talking about vehicles talking to infrastructure and it’s anonymous data, that’s all well and good but when we’re getting into tracking vehicle movements, driving style and whether that data is going to be sold on to third parties, that’s more concerning.”