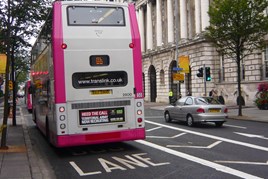 Glenn Ewen said: “Fines incurred by our vehicles were immediately paid by the leasing company and forwarded to Clear Channel as a cost with an administration fee added on. It made appealing against the fine very difficult.

“We decided that we wanted first sight of any fine and so registering vehicles in Clear Channel’s name to the company’s address was the answer. It proved to be a deal breaker with leasing companies.”

The solution, described by Julie Summerell, managing director of TR Fleet and ACFO digital chairman, as “innovative”, also saw Clear Channel register as many vehicles as possible with local authorities responsible for managing traffic cameras. The reason for this was that many of the fines received related to parking and bus lane infringement, as employees changed billboard advertisements and undertook maintenance work at around 40,000 bus shelters nationwide.

Clear Channel’s commercial vehicles, which typically incurred fines at a rate of 20 per day at a cost of £50,000 a year, parked at bus shelters while work was being undertaken were exempt from bus lane regulations. Ewen said: “We now contest all fines and win 99.8% of the time. Our vehicles are clearly liveried and if we lose it is usually because the rules have been broken.”

Previously its company car fleet incurred annual fines of around £15,000, with an average five penalties per day, any fines now received are immediately passed on to drivers for payment.

Ewen said: “Drivers receive a copy of the fine notice and are told to deal with it and pay, but we do encourage drivers to appeal fines. However, if Clear Channel receives a ‘charge certificate’ giving notice to pay the original fine plus 50% more then, as a last resort, the payment is made through expenses or payroll. For persistent offenders their line managers and HR are copied in.”

Commenting on Clear Channel’s approach, Julie Summerell said: “I think that getting leased vehicles to be re-registered in the lessee’s name is quite unique. I don’t know any other fleet that does that. It will be interesting to see how leasing companies react if other fleet managers follow Clear Channel’s lead.”

Up to 12 million motorists receive a penalty notice each year – the equivalent of one every 2.5 seconds, new research from the RAC Foundation suggests.

The figure equates to 528 fines a day – the highest of any London council included within the research published by Click4Reg.co.uk.