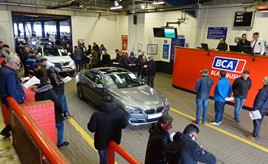 The average values for fleet and lease, and dealer part-exchange vehicles rose to record levels at BCA in December 2019.

This, it said, impacted the headline figure, with an increased percentage of dealer part-ex vehicles sold during the month.

Stuart Pearson, chief operating officer for UK remarketing at BCA, said: “Professional buyers were very active throughout December building forecourt stock for the New Year and this strong demand carried on over the Festive Season.

“Retail conditions for used vehicles remained very positive throughout December and as a result, BCA staged a very successful programme of incremental sales between Christmas and the New Year at BCA Blackbushe, Manchester, Nottingham, Measham and Brighouse, along with a number of specialist digital events.”

He continued: “Strong demand has continued at BCA into 2020 with significant activity across the board for the widest range of stock during the early days of the New Year and our customers are reporting positive levels of retail activity.”

Fleet and lease values averaged £12,437 at BCA in December 2019, the third time in four months that BCA has reported a record value for fleet stock.

Year-on-year values were up by £647 (5.5%) with both average age and mileage continuing to rise. The retained value against original MRP (Manufacturers Retail Price) averaged 42.4%, down by 1.8 percentage points, year-on-year.

Average values for part-exchange vehicles were up by £46 (0.9%) compared to the same month last year with stock showing a lower profile of age and mileage.

Values for nearly-new vehicles at BCA averaged £25,021 in December 2019, with year-on-year values up by £361 (1.5%).  Model mix has a significant effect in this sector, with brand specific winners and losers.