New 20mph speed limit in central London from next week

Transport for London (TfL) will be introducing a new 20mph speed limit across 8.9km of the capital’s roads within the Congestion Charging Zone from Monday (March 2).

TfL will recalibrate all the speed cameras and a dedicated Metropolitan Police speed enforcement team will target speeding drivers across London from April.

Speed is a factor in around 37% of collisions in London where a person dies or is seriously injured, which is why reducing the speed limit is key to the Mayor's Vision Zero commitment to eliminate death and serious injury from London's transport network, says TfL.

The Mayor of London, Sadiq Khan, said: “I am absolutely determined to do everything I can to eradicate all deaths and serious injuries on London’s roads and these new measures are a vital step along the way to helping us to achieve this.

“By cutting speed limits on TfL’s roads within the Congestion Zone we are saving lives, while at the same time making our streets more appealing for Londoners to walk and cycle around the capital.”

Andy Cox, Metropolitan Police Detective Superintendent, added: “Excessive speed unfortunately remains a common cause of serious and fatal collisions across London and the consequences can be devastating for those involved and their families.

“Safe speeds are key to achieving the Vision Zero ambition and it’s vital that those driving or riding on our roads respect the law on speed limits. We will actively target speeding and dangerous drivers and ensure they are dealt with robustly.”

A further 2,256 people were reported as seriously injured in collisions where speed was recorded as a contributory factor.

Cutting speeds from 30mph to 20mph significantly reduces the likelihood and severity of these collisions, saving lives, says TfL.

People walking and cycling are particularly vulnerable to speeding vehicles and nine pedestrians have already tragically died on London’s roads this year.

Jeremy Leach, London Campaign coordinator for 20’s Plenty, said: “Getting maximum speeds down to 20mph has a huge impact on making roads feel and be safe for all Londoners and 20's Plenty is really pleased that reducing speeds is right at the heart of TfL's plans for safe streets across London. This though is only the first part of a wider programme to tackle the dangers that speeding causes to us all.

“We look forward to news of more 20mph limits on TfL's Red Route roads and more encouragement for the last few London boroughs to go 20, all supported by the huge commitment that the Metropolitan Police are putting into tackling speeding drivers.”

The changes mirror the lower speed limits already in place across many borough roads in central London. 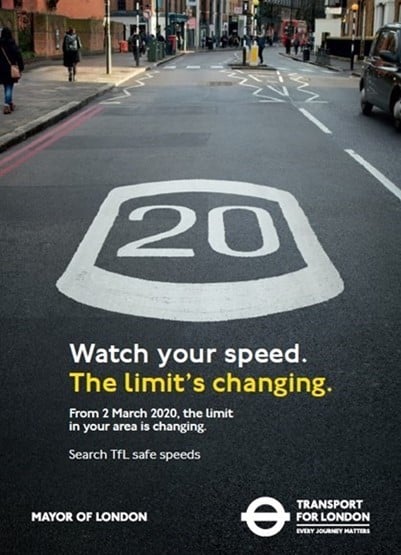 A new TfL marketing campaign will focus on the changes coming into force on 2 March, highlighting the importance of lower speeds and encouraging road users to comply with the new 20mph speed limits. The campaign is live across radio, print and digital advertising.

Over the next five years, TfL will work with boroughs and the public to introduce lower speed limits more widely across the capital.

Achieving lower speeds in London is vital for achieving TfL’s Vision Zero commitment to eliminate deaths and serious injuries from the transport network by 2041.

20mph speed limits in London are set to become widespread throughout London as part of a plan to eliminate deaths and serious injuries on the capital’s roads.