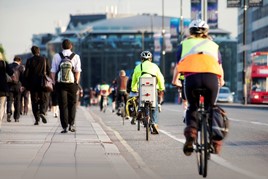 The Government has changed enforcement rules to allow the use of cameras to fine drivers who flout new road restrictions aimed at encouraging cycling.

Councils across the country are redistributing road space to encourage more people to cycle and walk, rather than use public transport, with some temporary measures already being employed.

However, the change in the law, which comes into force from June 22, will now allow local authorities to enforce new cycle lanes with an approved device.

This means that where roads are changed to restrict access to cycle or bus/cycle use only, councils can deploy CCTV cameras to enforce the new regime.

Social distancing measures have drastically reduced the capacity of public transport and Government is urging commuters and business travellers to walk or cycle instead.

Last month, it launched a £2 billion package to encourage alternative ways to travel, with an initial £250 million being released to create cycle and bus-only corridors within weeks.

The Mayor of London, Sadiq Khan, has said some streets in the capital will be converted to walking and cycling only, with others restricted to all traffic apart from buses.

Euston Road is one of the first main thoroughfares to have temporary cycle lanes installed and Park Lane could follow suit.

They are prioritising a range of temporary, pop-up measures such as footway extensions, one-way streets, removing through traffic on certain roads and adding extra cycle lanes.

In a letter to transport minister Baroness Vere, RHA chief executive, Richard Burnett, questioned how much road space was being lost to vans and trucks.

“In London, the place with by far the highest cycling levels of UK cities with more than 200,000 people, just 2.5% of trips are made by bicycle,” he said.

“We appear to be taking space away from the 97.5% of other road users to favour a small minority.”

He insisted that the RHA was not anti-cycling, but it simply believed the road network needs to work for “all road users”.

The RHA is particularly concerned about the removal of parking. Burnett says access to businesses in urban areas is “already difficult” in many places.

The current situation has made problems worse as the need to socially distance, when making deliveries and collections, can extend waiting times.

Burnett said: “We are already seeing enforcement of petty overstay times when making deliveries. Reducing parking for goods vehicles further – the vehicles that are essential for the businesses of people of our cities – is extremely unhelpful.”

But figures from Lex Autolease suggest rate of increase is slowing, with volumes up just 3%.