Coronavirus: SMR threat to fleets as lockdown is lifted 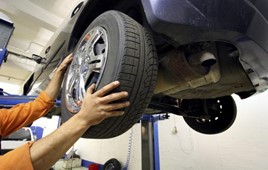 Service, maintenance and repair (SMR) for fleets is coming under pressure on three fronts, according to Epyx.

Fleets face a shortage of capacity from SMR providers, notably around MOT testing, while also having to cut costs and potentially deal with an aging fleet as replacement cycles are extended.

Tim Meadows, vice president and commercial director at Epyx, said: “We’ve been looking closely at how coronavirus is likely to affect SMR over the next few months and into next year, and these triple threat factors are the main trends we have identified.

“In a sense, the budgetary factor is the main one. We’re already in unprecedented, tough economic times and they are probably only going to get worse in the short-medium term. Money pressures are becoming very real.

“What we would say to fleets is to seek advice about strategies that can be adopted to reduce expenditure without potentially straying into areas where safety could suffer.”

In terms of MOT testing, the RAC has warned that hundreds of thousands of vehicles due to be tested this summer could end up causing a backlog if drivers take advantage of the six-month MOT extension.

The has Government announced that mandatory MOT tests for cars, motorcycles and vans in England, Scotland and Wales will be restarted from August 1.

Those vehicles due an MOT before August 1 will receive a six-month exemption.

Vehicles were granted the six-month exemption from MOT testing in March, to help slow the spread of coronavirus.

Meadows acknowledged that there could be a “short-term” issue with SMR capacity. “With the six-month extension to testing, now coming to an end at the start of August, MOT stations are likely to be under pressure,” he said.

“We are already advising fleets to book ahead now. From the end of September, there is a genuine possibility that you may not be able to get a test which, of course, will force vehicles off the road.”

Fleet Assist is also warning that dealer closures could further compound the problem.

In recent weeks, nearly 20 franchised dealers have either closed or are set to close as a result of the Covid-19 pandemic.

Vincent St Claire, Fleet Assist’s managing director, explained: “In today’s environment to simply say you have a list of garages with assumed terms, is not good enough.

“A network of garages with contracted terms, defined SLAs and a clear indication of their capabilities proactively and continually managed by a dedicated team, is essential.”

A tendency to extend vehicle fleet cycles during difficult times will also potentially create complications, according to Meadows.

“The SMR profile of a three-year-old vehicle is quite different to a four year old one, and different again if you move into a fifth year,” he said. “It means keeping a much closer watch on the roadworthiness of cars and vans.”

The UK vehicle leasing company is working to support a number of key businesses, including some of the UK’s largest pharmaceutical and medical supply companies.

Fleets urged to be more cautious of vehicle roadworthiness as the coronavirus lockdown means some key maintenance and inspections will be deferred.

But Epyx warns fleets to ‘take care' as evidence emerges of "serious" component failures, alongside flat tyres and batteries, after vehicles have stood idle.