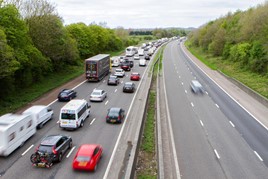 Almost three-quarters (72%) of business trips were made by car or van in 2019, according to new data in the National Travel Survey.

The survey results, published by the Department for Transport (DfT), also show less than one in 10 (7%) business trips were made by rail.

The average number of business trips per person was 28, while their average business mileage was 555 miles and average journey time was 42 minutes.

The National Travel Survey is a household survey of personal travel by residents of England travelling within Great Britain, from data collected via interviews and a seven-day travel diary, which enables analysis of patterns and trends.

The business travel statistics highlighted in the report, therefore, need to be treated with a degree of caution, having been drawn from such a small sample.

The National Travel Survey, however, does give an interesting overall look at travel habits of the wider population.

On average, people spent just over an hour a day travelling in 2019, including 35 minutes by car (as a driver or passenger), 11 minutes walking, 13 minutes on public transport and 2 minutes on other private transport modes. The most common trip purpose in 2019 was for leisure (26%), followed by shopping trips (19%) and commuting (15%). These proportions are broadly unchanged since 2002, but the total amount of trips and total distance travelled has decreased since 2002, and 2018.

The report suggests that factors behind the decrease might include, changing demographic patterns, changing patterns of trips, and the impact of new technologies influencing the demand for travel; for example the increase in online social networking, the capability for home working and online shopping.

Around 71% of women in this group hold a driving licence, however this figure has grown by 15% since 2002.

Between 2002 and 2019, the number of licence holders increased by more than two and half times, to 32.7 million individuals.

When considering women, 20% live in households without access to a car, a decrease of 2.8 percentage points over the same period.

Business travel set to decline by 25% in next five years, finds Sewells

A significant proportion of companies are actively seeking both to reduce business travel and to cut the number of employees commuting to the workplace, research by Sewells has found.

Fleet News hosted a webinar discussion on July 28 looking at the UK business response to the fleet challenges presented by Covid-19 and what it means for future fleet policy.