Organisations and individuals have been recognised for their contribution to improving the safety of at-work drivers at the UK Fleet Champions Awards, 2020.

The virtual ceremony, hosted on November 19, saw 40 fleet operators, suppliers and manufacturers in the UK fleet industry compete to win one of 14 awards on the night.

Ross Moorlock, chief operating officer at Brake, said: “We were thrilled to receive so many strong entries again this year demonstrating the fantastic work being undertaken by organisations and individuals across the industry.

"In what has been a difficult year for everybody it was great to bring so many from the industry together at the awards ceremony and to celebrate the successes from over the last year, a huge congratulations to all of our winners and highly commended entrants.”

The prestigious Kevin Storey Award for Outstanding Commitment to Road Safety was awarded to John Boocock at Fleetmaster Group.

VisionTrack was also presented with the Dr Will Murray Award for Analysis and Action and were Highly Commended in the Fleet Safety Innovation category.

Simon Marsh, managing director at VisionTrack, said: “We are thrilled that we’ve been recognised at these awards and proud of all the hard work to constantly make sure we stay at the cutting edge, whilst delivering the service our customers expect.”

Trakm8 was awarded the Fleet Safety Partnership Award at the event, for its improvement solutions provided to Altrad Services UK. 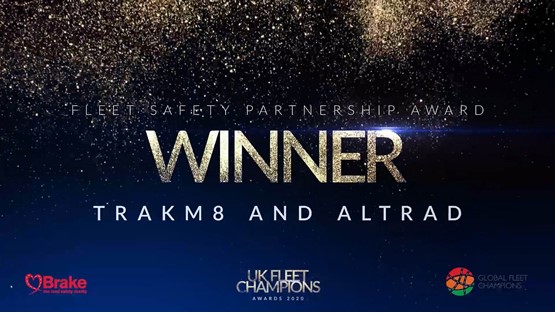 Peter Mansfield, group sales and marketing director at Trakm8, said: “It’s important that we celebrate the life-saving work the fleet industry undertakes in order to keep roads and drivers safe and this award win is one of many examples of how the latest telematics technology can bring about real change for fleets across the UK.”

Inspace Media was the winner of the Fleet Safety Product Award for the development of its illuminated chevron and safety signage technology.

Alex Knowden, director of sales and business development at Inspace Media, said: “This UK Fleet Champions Award acknowledges the dedication and hard work that has taken place to bring our industry-first vehicle safety proposition to market, which has been developed to reduce roadside collisions and ultimately prevent injuries and fatalities.”

Brake also announced the winners of its 2020 Vision Zero Leaders Awards, celebrating the stories of individuals ‘leading the way’ to safe roads with zero road deaths and serious injuries.

The junction forms part of Greater Manchester’s Bee Network and places the cycle route on the outside of the pedestrian crossings, segregating cyclists and improving safety for all road users.

Richard Butler and Jonathan Salter, CYCLOPS designers and engineers at Transport for Greater Manchester, said: “As design engineers, safety is paramount to every design we develop, so to be recognised by a road safety charity such as Brake for the part the CYCLOPS plays in keeping people safe while enabling them to travel more actively, truly is the pinnacle for us.”

Amanda Russell has been awarded the Community Campaign Achievement Award for 2020, by a panel of judges from Brake, Cycling UK, Living Streets, Sustrans and 20’s Plenty.

Russell achieved a town-wide 20mph trial scheme in Kent and since her efforts in Faversham, more areas of Kent have looked to implement 20mph limits.

She said: “I’m honoured to accept the 2020 Community Campaign Achievement Award from Brake, on behalf of all our campaigners and supporters who have helped to make this happen.

“I hope that our story can spur on more people to campaign for safe speeds. The 20mph limit in Faversham will make our streets, and in fact the whole community, feel so much more welcoming, especially for people wanting to get about by foot or by bike.”

Three students from Murray Park school, in Derbyshire, Arjun Binning, Archie Couchman and George Ogan, have been awarded the Youth Leadership Award for their work raising awareness about road safety in their school and local community.

The winners were announced at a virtual awards ceremony on November 19, 2020 during Road Safety Week.

Dr Will Murray Award for Analysis and Action

Road Safety in the Community Award

Brake has announced the shortlist for its 2020 annual UK Fleet Champions Awards.

Thatcham Research and the Association of British Insurers are calling on the Government to carry out further safety tests before the technology is introduced.

Fleets are being urged to take part in Brake’s Road Safety Week, which runs from November 16-22.