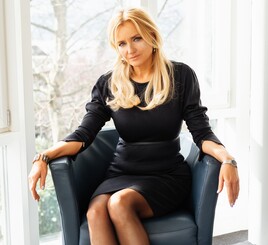 The High Court has issued an arrest warrant for Julie Meyer for failing to attend a court hearing last week.

She resigned as a director of Drive Software Solutions on February 9.

The case relates to a dispute over almost £200,000 in unpaid solicitors' fees with law firm, Farrer & Co.

Meyer claims she was given a poor standard of service and that she should only have to pay the firm £50,000.

The decision to issue an arrest warrant comes after the High Court gave her a six-month suspended prison sentence, earlier this month, finding her guilty for contempt of court for failing to hand over financial documents and attend multiple court hearings.

After failing to appear for the subsequent hearing on February 14, the courts issued a warrant for Meyer's arrest.

The High Court had previously ruled her medical evidence - conjunctivitis and not being vaccinated against Covid-19 - were not grounds to avoid attending the court hearings in person.

She told Fleet News that she is unable to hand over financial documents, as doing so would cause her to breach Swiss laws.

"Company law in Switzerland is quite different than in the UK," she explained. "The disclosure that the UK courts have required of me are not allowed in Switzerland, and we have had very clear Swiss legal advice that we should not comply because we would be breaching Swiss law.

"This does seem to a situation where the Swiss and the UK law is in conflict. I am a resident here however and take my responsibilities seriously to my firm.

"We have appealed the Contempt of Court Order on the grounds that I should not be forced to be in violation of another country’s laws. No private citizen would ever disclose company information in Switzerland; there is nothing equivalent to what the UK courts have tried to do in Switzerland."

Meyer also stressed that the matter had nothing to do with Drive Software Solutions.

In the ruling earlier this month, High Court judge Mr Justice Kerr said Meyer had shown herself to be a “selfish and untrustworthy person”.

He continued: “Her word counts for nothing if it suits her to break it, she shows indifference to the respect properly due to the court and to the financial and resource burdens to which she continues to subject the clamant and the court.

“It is necessary, in my judgment, to teach her that the court is not to be trifled with. I reject the idea of imposing a fine. The defendant would not, in my judgment, pay it if she could avoid doing so.

“To make her pay, if achievable at all, would impose yet further on public resources and it would make enforcement of the judgment more difficult for the claimant if she did pay.

“In my judgment, a sentence of imprisonment is appropriate and necessary because the breach is deliberate, cynical and continuing and because, on the evidence before me, I am satisfied there is every prospect that the defendant will continue to flout orders of the court unless coerced into obeying them.”