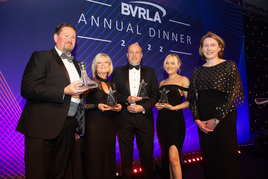 Five individuals have been recognised for their contributions to the industry at the latest British Vehicle Rental and Leasing Association (BVRLA) annual dinner.

The event saw the BVRLA name its three peer-nominated Industry Heroes, as well as the top performer on the association’s e-learning platform and the Freddie Aldous Outstanding Contribution award.

In memory of the BVRLA honorary life president who passed away in 2017, the Freddie Aldous Outstanding Contribution Award was presented to Lee Hamlett, commercial director at Kinto UK.

The award is presented to an individual that has made exceptional contributions to the industry overall, while committing significant efforts to support the work of the BVRLA.

Gerry Keaney, BVRLA chief executive, said: “When it comes to residual value and remarketing, there is nobody that has given more to represent the sector, help educate those around them, and raise overall standards, than Lee. The sector would be in a different place were it not for his continued commitment and palpable passion.”

The BVRLA had named Sue Palmer from Finance One Limited as the Learning and Development Achiever of the year, as well as three Industry Heroes.

Nominated by peers, the Heroes are those to have turned in'exceptional performances' in their respective fields and made an extraordinary contribution to their organisations.

This year’s Industry Heroes were:

The dinner was opened by chairwoman Nina Bell and attended by more than 750 delegates.

Donations were collected for automotive charity, Ben, on the evening raising thousands of pounds, said the BVRLA.

Nina Bell, BVRLA chairwoman, said: “From a government relations perspective, I can tell you that we are well and truly in a post-pandemic environment, with an unprecedented number of consultations and discussions with policymakers.

“Thanks to a huge amount of input from members, BVRLA activity achieved great things last year, including the securing of £620m for targeted plug-in grants and charging infrastructure, while successfully lobbying for a fleet-friendly 2035 phase-out delivery plan too.”

The BVRLA annual dinner will return on Thursday March 2, 2023.

The BVRLA will host a webinar to discuss the ongoing vehicle supply issues affecting the rental and leasing sector.

The latest news from the fleet industry, including AFP’s dealer standard, BVRLA conference and Aldi trialling an all-electric refrigerated trailer.

The BVRLA leasing fleet grew by 5.1% in 2021 to pass pre-pandemic levels, with vans continue to drive the recovery of the sector.