Instances of speeding among their predominantly 17-24 year old drivers increased by over a fifth in the hour before England matches at the 2018 FIFA World Cup.

"But fans must make sure that no matter how big the game, it is not worth the risks that come with speeding.

"Leaving 5 minutes earlier is a much safer way of getting home for the game – and avoids the risk of a collision that could have lifelong consequences.” 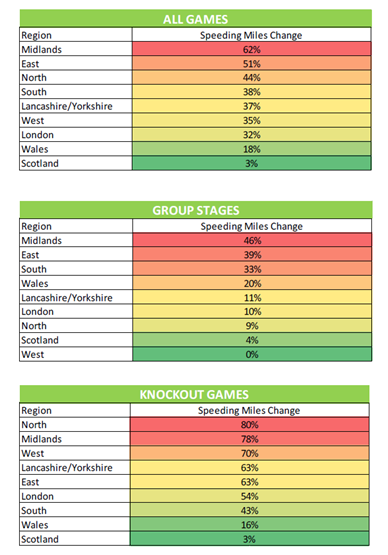 The results found that drivers in the Midlands sped the most during group stage games, which saw a 46% speed increase. This rose during knockout stages, with speed up by 78%.

East of England drivers ranked second overall, with a 133% increase in speeding before the Croatia semi-final – the highest in the country for this match.

However, while young drivers in the West of England appeared to stay within the speed limit during the group stages, when the weekend hit and England played Sweden, there was a 167% increase in the hour before the game.

Fans in the North were also more excited by the Sweden game, recording a 161% increase in speeding.

Research into crashes involving young drivers has concluded that they need to learn more quickly about how to avoid crashes with vulnerable users.

Novice drivers could face new restrictions after the Department for Transport announced it is investigating introducing graduating driving licences.

More than 70% of high-impact collisions recorded by Insurethebox's accident alert service last year were triggered by 17 to 21-year-old drivers.