Highways England says it will create a new 10-mile dual carriageway to transform one of the region’s most congested roads and junctions.

Journeys on the A1, the A421 and the A428 will be improved by a new three-tier junction at the Black Cat roundabout in Bedfordshire, which will allow drivers to pass through the junction uninterrupted, while keeping the roundabout clear for drivers making turns between the roads.

The new, 10-mile dual carriageway will link directly between the upgraded Black Cat junction and the Caxton Gibbet roundabout near Cambourne in Cambridgeshire, with a new junction at Cambridge road and new bridges.

The existing A428 will become a local road serving communities between St Neots and Caxton Gibbet.

Highways England project lead Lee Galloway said: “This major new dual carriageway between St Neots and Cambridge and upgrade for the Black Cat junction will mean quicker and safer journeys for people and will also boost the economy and unlock housing.

“As well as significant improvements locally, the project will be a vital component in improving the regional and national road network.

“The improvements will complement our £1.5 billion A14 upgrade and form part of a wider transformation of road links between Cambridge, Milton Keynes and Oxford.”

Highways England said that more than 4,000 people took part in a consultation last year, with more than 2,000 people attending one of its public events.

Galloway continued: “I would like to thank everyone who took part for their contribution in helping to shape this vital upgrade for the area’s road network.

With the options now chosen, we can push ahead with a more detailed design, which we will put to people for their input again later this year.”

Currently, the A428 between the A1 at Black Cat and the A1198 at Caxton Gibbet is a single carriageway with a series of roundabouts and give-way junctions. It experiences severe congestion and delays during peak periods or if there is an incident in the wider south Cambridgeshire area.

The improvements will cut the average peak time journeys between the Black Cat and Caxton Gibbet junctions by more than a third – around a 10-minute saving on every trip.

The improvements will tackle these delays by creating a new dual carriageway, with junctions served by slip roads, and bridges to carry local roads over it, said Highways England. 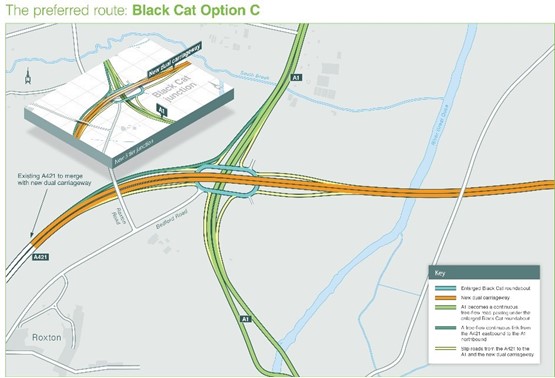 The new dual carriageway will lead directly to the Black Cat junction which is itself being upgraded to allow smoother, safer access between the A1, the A421 and the A428. The A428 currently joins the A1 at Wyboston 1.5 miles to the north.

The chosen options were referred to at the consultation as the Orange Route and Option C respectively. Nine out of 10 respondents agreed with the need for the upgrade, with a clear majority of respondents backing the options chosen (83% for the Orange route and 60% for Option C).

The scheme is valued between £810m and £1.4bn, and is being funded by the Government’s £15bn Road Investment Strategy.

The announcement paves the way for a further, more detailed consultation later in 2019, and a planning application, expected in 2020. Subject to statutory processes, main construction work on the upgrade could start before April 2022.

Work to improve A1 Black Cat roundabout starts next week

Work to reduce congestion on the A1 at Black Cat roundabout, on the Bedfordshire - Cambridgeshire border near St Neots, will start next week.

Highways England warns drivers to be aware of Gritters

Highways England is urging motorists to be more aware of Gritters this winter after 36 were involved in collisions last year.