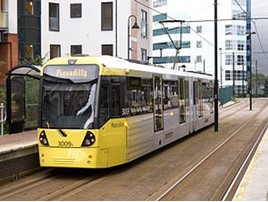 Visa has looked into the travellers experience on public transport, with almost half (49%) saying the introduction of contactless payments sits as the biggest development to their overall experience.

The study comes as Manchester introduces a contactless payment system for its trams, which means passengers can touch-in and touch-out at stops, with the technology working out the best prices and the cap.

The ease of payment, ability to monitor your outgoings (24%), lessened queuing time (45%) and no longer needing to carry cash (59%), were the key reasons for choosing the ‘touch and go’ payment method.

Stephen Rhodes, customer director at transport for greater Manchester, said: “Greater Manchester is the latest in a list of regions around the world rolling out contactless travel technology, improving access to jobs, leisure, skills and education opportunities for everyone living here.

“People now expect to pay as swiftly and seamlessly for travel as they do for any other purchase, so bringing contactless to Metrolink is a huge step forward for the city, and a boost to customer experience on the UK’s largest tram network.”

Manchester has joined other major cities around the world, such as New York and Singapore, in providing its customers with contactless journeys.

Visa’s study also found that the seven in 10 (69% UK adults use contactless payments on a daily basis).

UK finance’s recent data shows there are 124 million contactless cards in the UK, with 7.4 billion payments being made in 2018.

Steven Orelowitz, head of transit, Europe, Visa, said: “The UK continues to lead the way when it comes to contactless payment systems on public transport.

“London's contactless system set the gold standard being adopted around the world, and we are thrilled to have partnered with Transport for Greater Manchester to launch contactless on Metrolink trams.”

“By adopting a contactless system that enables customers to simply turn up and travel without having to work out which ticket they need, Manchester has put itself up there with some of the most forward-thinking global cities when it comes to ensuring that locals and visitors can move around with ease.”