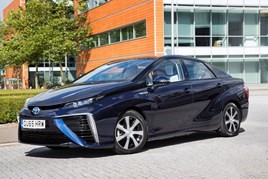 The vehicle fleet involved in a pan-European project aimed at supporting the commercialisation of fuel cell and hydrogen technologies across the continent, has now travelled over eight million kilometres since the project began in 2015, with over five million of these happening in 2018.

Hydrogen Mobility Europe (H2ME) announced its latest results and progress in its drive to increase the usage of hydrogen within mobility. The project has now deployed close to 500 hydrogen-powered fuel cell electric vehicles (FCEVs) and 30 hydrogen refuelling stations (HRS) across a number of countries including Germany, France, Scandinavia, and the UK.

The H2ME initiative aims to support the commercialisation of fuel cell and hydrogen technologies in Europe. In addition to creating the world’s largest network of HRS, it is sharing best practice and standards between the 43 partners and “helping develop attractive ownership models in use cases such as taxis, captive fleets, and in cities with strict environmental targets”. In total, the project will deploy 49 HRS and 1,400 hydrogen fuel cell cars and vans by 2022.

Ben Madden, director at Element Energy, project lead and coordinator, said, “Governments at a national and local level are putting in place concrete targets to reduce emissions and accelerate the switch to zero-emission mobility. The H2ME project demonstrates that hydrogen can play a central role in this shift, ensuring that all road users have the option to participate in the transition, thanks to its ability to provide fast refuelling and long range. Today, we can already see an acceleration of the use of hydrogen as a fuel in heavy-duty and high demand applications, such as taxis, delivery vehicles and trucks.”

Findings and conclusions from H2ME will be shared at the Hydrogen for Clean Transport mid-term conference, which will take place in Hamburg on 25th October.

Hydrogen is considered by many to be the best alternative fuel for automotive purposes but there are complications with its safe and efficient storage and very significant concerns surrounding the costs of a hydrogen infrastructure for transportation.

Back in 2014, UK researchers announced what they believed to be a game-changer in the use of hydrogen as a ‘green’ fuel. The discovery by scientists at the UK’s Science and Technology Facilities Council (STFC), offered a viable solution to the challenges of storage and cost by using ammonia as a clean and secure hydrogen-containing energy source to produce hydrogen on-demand in situ.

Arval says more than 50 delegates attended the first in a series of five roadshows to raise awareness of hydrogen cars.

A project to deliver a zero-emission hydrogen fuel cell ambulance is one of 22 schemes to receive a share of £25 million in Government funding.