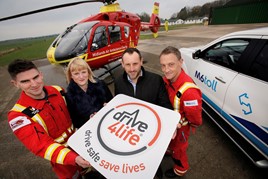 According to research, company car drivers spend more than two-and-a-half hours in their car per day, which equates to nearly three years of their working life in the drivers' seat.

The above statistic means drivers travelling an average of 235 miles a week, will travel nearly half a million miles over the course of their career.

Ian Roberts, air operations manager for Midlands Air Ambulance Charity, said: “Due to the nature of our operation, and the ability to bring enhanced pre-hospital care to the roadside, critical care paramedics and doctors are often called out to some of the most badly injured patients involved in road-related incidents.

“Unfortunately, there is an upward trend in the number of road traffic collisions (RTCs)  we attend year on year, which has a cost impact on the charity.

‘Drive4Life’ is a new initiative between the ambulance charity and the M6toll and will highlight the increasing cost of RTCs to the charity and urges fleet managers to invest more time delivering fleet driver training in a bid to improve driving standards.

Each air ambulance mission costs the charity £2,500 which is funded through the generosity of local businesses and the communities it serves.

With the service relying solely on donations, it’s worried that the rising number of RTCs the aircrew attend each year, will make the cost unsustainable.

James Hodson, director of motorway operations at M6toll, said: “While statistically the M6toll is one of the safest motorways in the UK, we are always grateful for the lifesaving support of the Midlands Air Ambulance when accidents do occur.

“We are so proud to support this valuable campaign, helping to communicate vital road safety messages to drivers across the Midlands and beyond and we'd urge fleet managers to do the same.”

Safety and risk management continues to be a major priority for fleets, with the process often beginning during the recruitment of a new employee.

Protecting vulnerble road users (VRUs) has also been a safety and risk management issue that fleet operators have been trying to improve on.

Fleet managers should encourage their drivers to sign safety pledges before the Corporate Manslaughter Act comes into force next year.

Recalls of vehicles posing a serious safety risk are at their highest since 2010, according to analysis by international law firm Pinsent Masons.