Five of Europe’s largest logistics firms have started an innovative trial this month in Berlin, sharing a depot and making deliveries by bicycle or e-bike. Jonathan Manning reports.

The year-long experiment is an attempt to find sustainable solutions to urban congestion and air quality for an industry that relies on being able to make last mile deliveries.

It also presents a vision of how courier businesses might overcome the shortage of city centre real estate for warehousing.

DHL, DPD, Hermes, GLS and UPS will share what’s billed as a micro depot in the Behala area of Berlin.

They will each have one container to receive and store consignments, and they will then be individually responsible for dispatching the parcels and packages with their own company-owned cargo bikes.

The depot itself is run by the port authority, Behala, which is independent of all the couriers, and the German government is keeping a close eye to see whether the system can be exported to other cities. 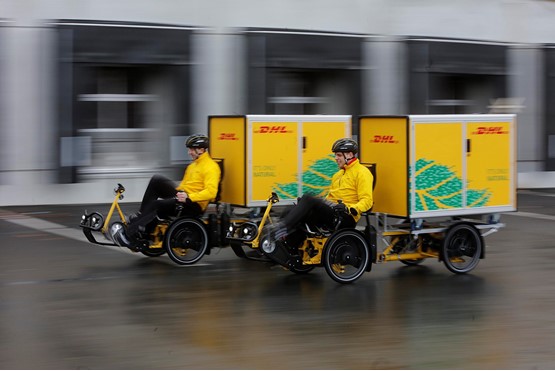 Regine Günther, senator for the Environment, Transport and Climate Protection, described the project as “a building block for a new mobility in Berlin, but also far beyond Berlin”.

Manoella Wilbaut, head of global commercial developments and sustainability at DHL, said the depot, nicknamed KoMoDo, “really saves space”. Speaking at the Movin’On mobility conference, she added that, “it does not make sense for each company to have its own depot”.

It does, however, force logistics firms to be absolutely clear about their core business if they are going to share resources, said Wilbaut.

DHL will use e-bikes and e-trikes to for its deliveries from KoMoDo, and said that, with favourable conditions, a cargo bike can adequately replace a conventional commercial vehicle in city centres.

Michael Peuker, KoMoDo project manager at Hermes Germany, said the cargo bikes would be able to use cycle lanes, so would not be held up in traffic. They are also allowed to travel in both directions along many one-way streets, a convenience denied to vans.

Counter-intuitively, the e-bikes may reduce the legwork for couriers because the battery pack takes most of the strain and the bikes can get much closer to the actual delivery address than vans forced to park wherever there’s an available space.

The bikes also present a sound economic business case – they are cheaper than LCVs and, given they don’t require a licence to drive, there’s a wider recruitment pool in which logistics firms can find couriers.

The success of pedal-powered last mile deliveries does depend, however, on being able to start from a depot within the delivery zone. Historically, logistics firms have chosen out-of-town locations to make them easily accessible for HGVs and then ferried the packages in by LCV.

“The absolutely crucial and decisive fact is that deployment of cargo bikes will not work without micro depots. Before we are able to contemplate using e-cargo bikes extensively, we first need space – and this is scarce and expensive, particularly in cities,” said Peuker.